AK-47 at the door: 3 charged with robbery 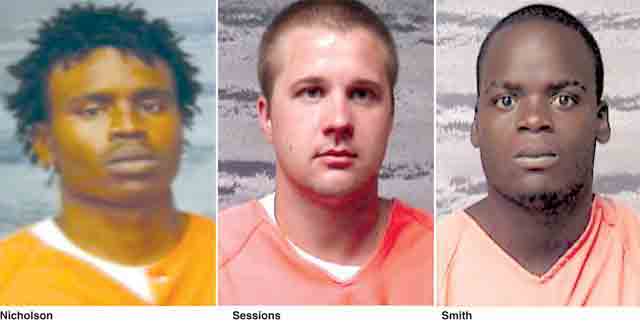 A Franklin Avenue resident got an unwelcome surprise Wednesday night when he answered a knock at his door.
Brewton Police Sgt. Steven Ferguson said officers responded to the call after the resident escaped two suspects who were demanding money in an armed robbery.
“The victim in this case said he heard a knock at his side door Wednesday night and opened the front door to find a black male with a large rifle,” Ferguson said. “A second suspect had knocked on the other door and the one at the front door was holding what the victim described as an AK-47.”
Ferguson said the victim found an opportunity to run from his home during the incident and was unharmed.
“When one of the suspects demanded money the victim told him it was in a back room,” Ferguson said. “He was hoping to get the suspects in the home and find a chance to get out of the house. One of the suspects went into the home and the other stayed outside with the gun. When the opportunity presented itself, the victim ran to a neighbor’s home and called 911.”
Ferguson said the victim stated the suspects also ran from the home after he was able to flee the scene.
“During our interview with the victim, he was able to give us a description of one of the suspects,” Ferguson said. “We acted on that information and identified the suspect and immediately began a search for him.”
Ferguson said the first suspect was found and taken into custody where he was also interviewed about the incident.
“After interviewing the first suspect, we were able to determine who the second suspect was in the case and went to find him,” Ferguson said. “As we continued to interview the witness, he was able to give us a description of a vehicle seen in the area during the time of the incident. We matched the vehicle to a female that lead us to a third suspect in the case.”
Ferguson said the third suspect in the case is believed to have organized the alleged robbery incident and is believed to have dropped off the two other suspects in the case.
“We have reason to believe the driver of the vehicle made the plan to take the two other suspects to the residence with the intent of robbing the owner of the home,” Ferguson said. “We were able to take all three suspects into custody in this case in a short time.”
Arrested in connection with the Franklin Avenue incident were Devin Nicholson, 20, 1018 Sowell Road; Deondre Smith, 22,  805 Hayes St.; and Travis Sessions, 23, 102 College Drive.
Nicholson and Smith are identified as the suspects who approached the homeowner demanding money, police said. Sessions was identified as the driver of the vehicle who took the suspects to the home, police said.
Ferguson said search warrants were issued quickly to recover rifles and other evidence connected to the case.
“We moved quickly in this case and had all three suspects in custody the next morning,” Ferguson said. “We are continuing to interview witnesses and are keeping the case open at this time.”
Ferguson said following arranged interviews, additional charges may be filed in connection with this case.
“We will continue to look into the evidence and information we have already uncovered in this case to see if it is linked to other cases,” Ferguson said. “There is a possibility that other cases could be closed as we continue this investigation.”
All three suspects were transported to the Escambia County Detention Center Thursday where they were booked on first-degree robbery charges.
Smith remained behind bars as of press time Friday due to a violation on a previous bond. Nicholson and Sessions were awaiting bond Friday.

Ricky Skaggs to perform in Brewton