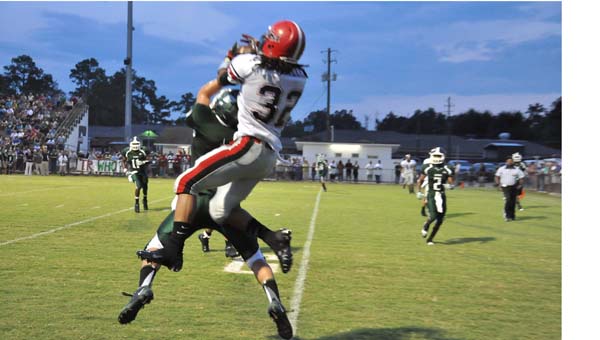 With Tropical Storm Isaac threatening to enter the Gulf of Mexico in the few days and turn into a hurricane, the T.R. Miller Tigers saw no Flomaton Hurricanes threaten to reach the end zone Friday night as they shutout Flomaton 21-0.
With the game divided up with the first half of varsity players and the second half of JV players, T.R. Miller led Flomaton 13-0 at the end of varsity action while the JV Tigers added eight points of their own and kept the shutout intact.
“It was nice to get the victory,” Tiger head coach Jamie Riggs said. “I thought we did some things well in the game. In the first half, we had some opportunities to carry the ball, make some blocks and get some plays on the goal line. The difference in the score was they got down there twice and we held them and we got down there twice and we scored. We made some nice plays in the game. In the second half we turned the ball over, which we can’t do. I think it helped us and helped us get a little better and that is what you want to do. We got a little game under our belts now and maybe some of the butterflies are gone for next week. We are going to have to perform a whole lot better than we did tonight and hopefully we will.”
The Tigers amassed 142 yards of offense in the first half with 124 coming on the ground and 18 in the air. In the second half, T.R. Miller rolled to 204 yards of offense with 187 on the ground and 17 in the air.
Overall, the Tigers totaled 346 yards of offense with 311 on the ground and 35 in the air.
Flomaton totaled 118 yards in the first half with 76 on the ground and 42 in the air. In the second half, Flomaton had 17 yards of offense with 14 on the ground and 3 in the air for a total of 135 yards on the night.
“We gave up some plays but the thing that really stands out is they just kept playing no matter where the ball was at on the field or no matter what happened,” Tiger defensive coordinator Chris Baxter said. “They just continued to play hard and that is what we have to have. We get inside the goal line, inside the 5 or 10 or whatever, we just can’t let up. We have to bow up and just play.”
Flomaton’s dual threat quarterback Rhyeem Dixon was held to 61 yards on 13 carries by the Tiger defensive—something that could help the Tigers when they face off against Escambia County’s Blue Devils spread offense and their quarterback.
“Absolutely, it helps us out a lot,” Baxter said. “That kid (Dixon) is a good player. A really good player. Atmore’s got a great player too.”
Riggs echoed the praise of Baxter and the defense and said his team will see the same thing next Friday in Atmore.
“He is a great player,” Riggs said of Dixon. “He made a few plays out there, but for the most part we got him down. We knew that is what it was going to be about. It will be the same issue next week with Atmore. They have a great quarterback so I think that will help us out a little bit.”
While speaking of Flomaton’s quarterback, Riggs said his own quarterback Kieon Smith ran the offense well Friday in replace of starter Kevin Davis who is out for the first few games while playing baseball overseas with Team USA.
“He did fine,” Riggs said. “He just has to get out there and play a little more. This was good for him to be able to do that. I thought we were a little slow in the first half and I was a little disappointed in that. I addressed that at halftime. I think we will get a little faster next week.”
In varsity action, Dominique Jackson led the Tigers on the ground with 52 yards on eight carries. Kameron Coleman added 13 yards on three carries and had one touchdown.
Smith went 1-for-3 with an 18-yard touchdown and had one interception.
For the JV Tigers, Tamerick Jenkins led with 142 yards on 18 carries.
Quarterback Jones Manning was 1-for-1 with a 17-yard touchdown to Kellyn Winn.
T.R. Miller will begin their 2012 season next week when they travel to Atmore to take on the Escambia County Blue Devils. Game time is set for 7 p.m.
T.R. Miller’s first home game of the 2012 season will be in week two—Sept. 7—when they will welcome the Opp Bobcats to Brewton Municipal Stadium.
The game will be the first region contest for both schools.