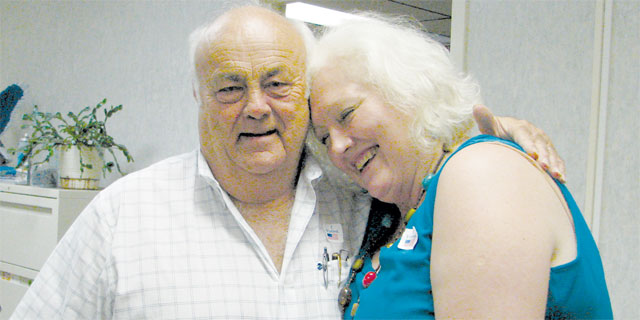 Clark gets a congratulatory hug from his wife, Marie after the announcement of the election results in East Brewton.

The East Brewton governmental body won’t be making any changes in the next four years with incumbents retaining their seats.
East Brewton Mayor Terry Clark took 78 percent of the vote to keep him in the top spot in the city.
Priscilla Ellington received 80 votes for the mayor’s seat with Louis Hinote receiving 32 votes.
In the race for place three, Ludon Simmons retained his seat by pulling in 383 votes with his opponent, Robert Bradley, receiving 113 votes.
In place 4, incumbent Bob Arrant won his seat in the battle against Michael Cosey. Arrant received 62 percent of the vote with 304 to Cosey’s 188 votes.
As Clark considered his return to the office he has held for decades, he said he felt good about the results.
“I’ve been in six races for the mayor’s city in East Brewton and I’m glad I’ve had the chance to run,” Clark said. “I’ve lived here all my life in this city that I love. I will lead this council as we work to continue to grow the city. We’ve been growing and we want that to continue. I’ll do my part to move the city forward.”
Ludon Simmons said his return to serve on the council for East Brewton is his chance to continue is job for the city.
“I feel really good at how this turned out,” Simmons said. “I know I still have a lot of friends. I have been here for four years and I feel as if I must be doing something right. I want to thank my family for what they have had to do, and it was a lot. I also want to thank the citizens of East Brewton.”
Immediately following the announcement of the results, the council members convened at city hall to officially declare winners in the race.
In other election news, winners were unofficially announced in the mayoral and council races in Riverview.
Incumbent Carl Smith was able to hang on to his seat by an almost 2-to-1 margin. Taking 32 votes, Smith beat out Dennis Hammac and Adam Sexton who captured 17 votes combined.
In the council seat races, winners were Melissa Smith-Britton, Linda Brunson, Judy Hudson, Sandy Townson and Melissa McCall will now fill positions for the town’s government.