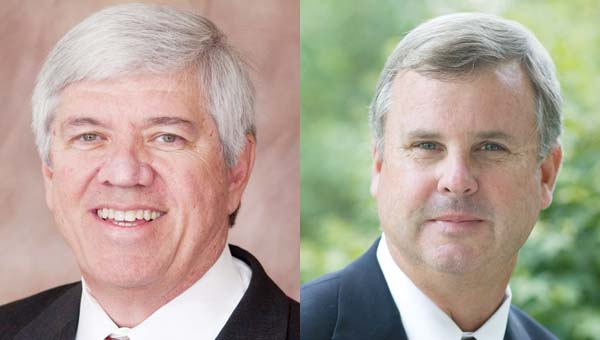 For four Brewton candidates, the campaigns aren’t over yet.

Yank Lovelace and Frank Nalty will face off in the Oct. 9 runoff for the mayor’s office, which is being vacated by retiring Ted Jennings.

In the race for the District 3 seat, a runoff election will be needed with Bill Littles and Butch McKenzie each hoping to capture the seat.

Lovelace earned 746 votes, while Nalty captured 503 votes to put them in the runoff.

Lovelace said he expects to continue working in a campaign to win the mayor’s seat in October.
“I’m glad we got this far,” Lovelace said. “I’m grateful to those who came out to vote. I’m certain we’ll be doing a lot of campaigning in the days ahead.”

Nalty said the support of the voters has given him an opportunity to continue his fight for the top spot in the city.

“I’m glad that my supporters came out and voted for me today even in this threatening weather we’ve had all day,” Nalty said. “Now, we are going to re-group and push ahead. We’ll join forces with other team leaders throughout the city and work to move forward.”

McKenzie said he was thankful for the race and expected to be in the position of a runoff situation.

“I said when I started all of this that if I made it to a runoff, I would be happy,” McKenzie said. “I want to thank my wife, children and friends that helped get me here. And of course I want to thank the citizens that took the time to come out to vote. I appreciate all that they have done.”

Littles said the run-off is something that will give him a chance to work a little harder.

“I feel great about the results,” Littles said.  “A run off is something I felt would probably happen. I am just going to work harder to bend the ears of people that didn’t hear me before. I’m genuine in what I want to do for the city. I’ll betting getting out and getting to work for the runoff election.”

In the District 1 race, incumbent Dennis Dunaway lost to Pat Poole — a lone opponent in the race. Poole edged out a win in the race with 282 votes to Dunaway’s 274 votes.

“I’m very happy. I knew it would be a tight race,” Poole said. “Dennis has done a good job and I have a lot of respect for him — this is just something I wanted to do. Being a newcomer to the area, I’m glad people had the confidence in me to allow me a chance to help govern and lead the city.”

In the district 5 race, incumbent Fred Barton handily won a reelection to the seat against opponents Randall Pugh and Rufus White.

Barton took 194 votes with White receiving 65 and Pugh pulling in 39.

Barton said he thanked God and his wife as well as his opponents. “Now I just want those guys to join with me to help make Brewton a better place to live,” he said. “I also want to thank the voters.” Barton said he looks forward to working with the new mayor and council to get things done for the next four years.