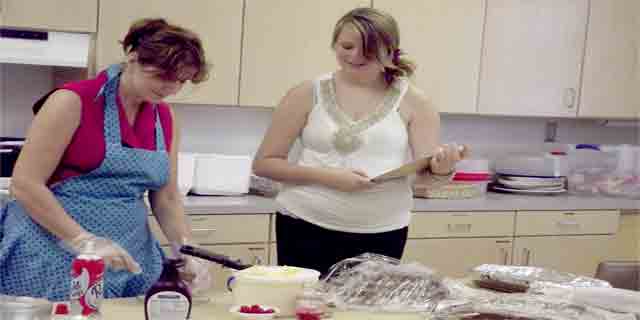 Sweet treats and an elegant atmosphere made a great combination for the first official fundraiser of Haven, a group focused on helping provide assistance to the Brewton Animal Control and Adoption Center.
Formerly known as the Friends of the City of Brewton Animal Control and Adoption Center, the group of volunteers gathered Saturday at the Brewton Church of Christ for a unique fundraiser dubbed “laDessert Cafe.
Laura Williams, founder of Haven, said the event was successful in raising much needed funds for projects of the group.
“The fundraiser of serving dessert is one of the ways we have thought of to get enough money for buy the things the animals need,” Williams said. “We are very proud to say that we raised more than $600 on Saturday and we are very pleased at the way people responded, and donated to the fund. I would certainly say that this was a success.
Williams also said future plans of the group will be including searching for assistance in other directions.
“When we  receive our tax-free status, we hope we will be able to get some help with the things we need,” Williams said. “The shelter has been very easy to work with and they have told us that they will keep animals as long as they can before they are euthanized, if we can help with the things they need.”
Volunteers put together a “la Dessert Café” to serve guests a fancy dessert in exchange for donations. A crew of workers prepared brownie delight and strawberry cheesecake for the event.
Williams said the group’s aim with the unique event was to raise funds to purchase an outside kennel for larger dogs being housed at the facility.
“We wanted to get something in place for those dogs that can jump an ordinary fence,” Williams said. “They are called jumpers by the people at the animal shelter, and are not allowed to go outside without a leash. This means that they do not get enough exercise.”
The next project of the Haven organization will be an event that will introduce some of the pets to the public.
Williams said with the cooperation of Walgreen’s and Tractor Supply Company, the group will be bringing some of the animals from the shelter to those locations to show the adoptability of the animals. That event is planned for Sept. 22 with times to be announced.
Williams said the support of the community has been a blessing and will help to further the groups efforts to provide for animals at the shelter.
“We want to thank everyone who came out to try the desserts on Saturday,”  Williams said. “We are now on our way to building those pens for the jumpers. We also want everyone to come to Walgreens and Tractor Supply to meet some of our animals.”
Williams said the group will continue to solicit items needed to help feed and shelter the animals that are remain at the facility. Among items in constant need are blankets, dog and cat food, towels, paper towels, dog and cat toys and cat litter.
Williams said the group will continue to make plans for projects and fundraisers as they continue to work with the Brewton Animal Shelter and Adoption Center.
A November project is already in the works for a “Barktober” event planned at Burnt Corn Creek Park. Date and time for the event will be announced by Haven members soon.
For details on becoming a member of the Haven organization or to find out more about the groups goals, contact Williams at 363-3252 or the Animal Control and Adoption Center at 867-1400.