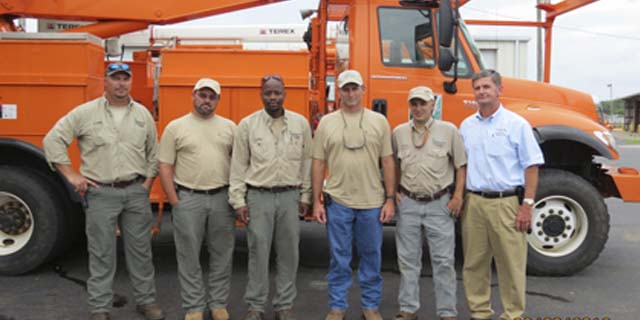 SPEC crew ready to depart for Mississppi to assist with restoring power after Hurricane Isaac passes through the state.

A six-member crew has left Brewton’s Southern Pine Electric Cooperative headquarters to restore what was damaged by Hurricane Isaac in neighboring Mississippi.

The crew left early Wednesday enroute to Columbia, Miss., where they will assist workers with Pearl River Valley EPA  – a cooperative power provider in the Mississippi community. The crew will work to restore power and with construction needs as a result of the storm that hit the area on Tuesday.

According to Southern Pine officials, thousands are without electricity after the slow-moving storm dumped many inches of rain on the state.

Mississippi and Louisiana were still feeling the effects of Isaac Wednesday and could see significant issues through Thursday.

Melanie Harrison, manager of communications for Southern Pine, said the crew could dispatched to other areas once their work is complete in the Columbia area – possibily into Louisiana.

“In times of disaster electric co-ops across the nation pull together to help one another,” Harrison said. “That’s one of the many remarkable aspects of a cooperative.”

Southern Pine Electric Cooperative, a Touchstone Energy® Cooperative, is headquartered in Brewton, Ala., with district offices in Atmore, Evergreen and Frisco City. The co-op provides electricity to more than 20,000 accounts in portions of five counties.