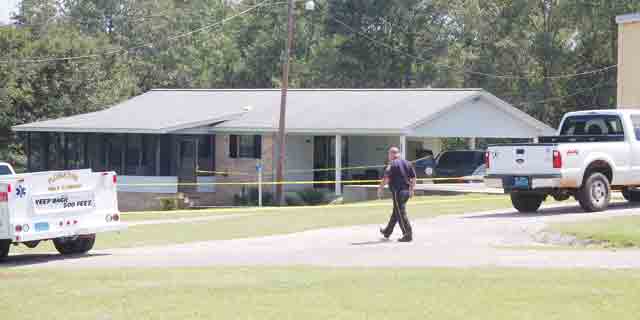 Investigators remained on the scene Friday afternoon after a stand off ended with Escambia County Sheriff Grover Smith shot and a suspect dead.

Escambia County Sheriff Grover Smith was shot and injured and a suspect turned the gun on himself during a standoff in Flomaton Friday morning.
Smith was being treated at a Pensacola, Fla., hospital Friday afternoon.
Just after 10:30 a.m. Friday, Smith, along with other law enforcement officers were involved in the incident that began when a mental commitment pick-up order was being executed at the residence of James Arrington Jr., who died at the scene.
Sheriff’s officials said the commitment order had been issued by the Escambia County probate judge’s office. The suspect became uncooperative and barricaded himself inside his residence.
Escambia County Chief Deputy Mike Lambert said Arrington fired one round at Smith in the altercation.
“Sheriff Smith was hit in the right forearm by a bullet fired by the suspect,” Lambert said.
Lambert said that because the incident involved a law enforcement officer, the investigation into the incident would be completed by members of the Alabama Bureau of Investigation.
Kevin Cook, public information officer with the Alabama Department of Public Safety and ABI, said their initial investigation showed that Arrington shot himself.
“Sheriff Smith was shot while conducting official business at the residence of James Arrington Jr.,” Cook said. “After firing on Sheriff Smith, Arrington then took his own life.”
Initially, officials said Smith would be transported to a Mobile hospital for treatment; however, other sources said he was being treated in a Pensacola, Fla., hospital for the non-life-threatening injury.
Lambert, who called the situation a “tragedy,” said he expected Smith to recover fully.
“Sheriff Smith is a strong man,” Lambert said.
Lambert also said other agencies responding to the incident along with Escambia County Sheriff’s deputies included the Brewton Police Department’s Special Response Team and the Flomaton Police Department.
“At one time we had about 25 to 30 officers on the scene,” Lambert said. “We did hand the investigation off to ABI officials when they arrived on the scene.”
Cook said the ABI would continue their investigation and turn over any information and/or evidence uncovered in the case to the Escambia County district attorney.
Officials with the Escambia County Sheriff’s Department and other law enforcement agencies remained on the scene for several hours following the incident Friday.