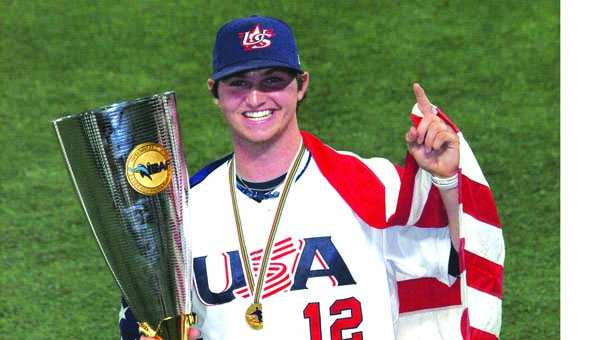 Saturday, Kevin Davis had a gold medal hanging around his USA jersey as he and his teammates celebrated a baseball world title in South Korea. By 6:15 Monday morning, he was in the field house at T.R. Miller watching film to get ready for this week’s game against Excel.
As part of USA Baseball’s 18-under team, Davis pitched against Korea and Australia and then delivered a win against Japan that secured the U.S.’s spot in the championship game. The 6-2 victory against Canada marked the first 18-under world title for the United States since 1999.
“It is a great feeling to be standing on that podium and you get that medal put around your neck and you hear the national anthem in the background,” Davis said. ìIt does not get much better than that. Whenever we got over there, we played our first game in Taiwan against Chinese Taipei. That was kind of getting us acclimated to what it would be like in Korea. Once we got to Korea, we were a lot more familiar with things. It was a lot different over there. It was a lot to get adjusted to the time zone change and the food. All in all, we were able to get the job done.”
Davis said one thing he learned about himself during the gold medal run is that playing on such a team is about more than just one individual.
“You go over there and you have 19 other guys competing against the world for a world championship,” he said. “I mean, everyone has a role that they have to play. If you want to go over there and win, everyone has to play their role. In high school ball, you are going to be the best one on the team. You go over there in summer ball and you are the best one on the mound. You go over there in the aspect of playing against teams from all over the world, it is not about you. It becomes something much bigger than yourself and the name on the back of the jersey. It is about the name on the front of the jersey.”
After being gone for a little over three weeks, Davis said it was good to be home.
“I have been on the road for a little over three weeks, so it is good to be home,” he said. “It felt good to be back and head to football practice today. I am just ready to get back in the groove for that.”
While he has missed three games this season for the Tiger football, counting the preseason game against Flomaton, the Tigers went 3-0. Despite being miles away, Davis said he followed the team.
“A bunch of us (on the baseball team) played football,” Davis said. “Kickoff is at 7 p.m. on Friday and it would be Saturday morning at 9 a.m. where we were. We would be in the lobby of the hotel trying to keep up with our team’s scores and other things. It felt great to get back out there today and get back going. I was able to follow along on the Brewton Standard’s Twitter. I also had people texting me.”
While glad to be home and ready to be on the football field Friday, Davis — who has already committed to Auburn to play baseball —said being part of the gold medal team was a great experience.
“It was just a great honor to go over there and represent your state, your country and your hometown and T.R. Miller High School,” he said.

TRM football up to No. 3