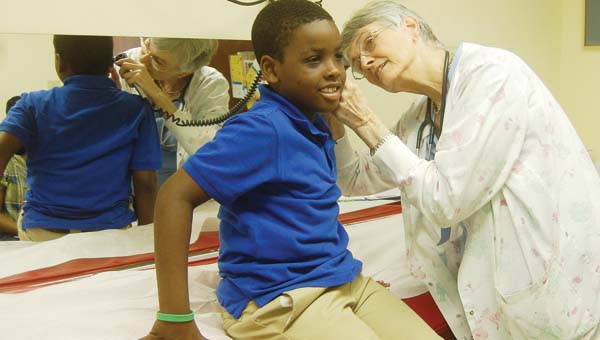 Loss of pharmacies and physicians; closing of health care provider offices; loss of more than 10,000 jobs and a complete loss of health care for nearly 9,000 children in the state: those are just some of the outcomes the state faces if a Constitutional amendment isn’t passed by voters on Sept. 18, supporters of the measure say.

The proposed referendum would allow the state Legislature to transfer funds from the Alabama Trust Fund, an oil and gas severance tax fund, to the General Fund to pay for services and programs throughout the state, including Medicare, prisons, the Department of Human Resources and other agencies. The borrowing would cover a three-year period as proposed in the amendment.

Local health care professionals are concerned about the impact a “no” vote would have on the system enjoyed by citizens in and around Brewton.

Chris Griffin, administrator at D.W. McMillan Hospital, said the impact from the failure of the amendment to pass would cause a huge ripple in the city’s access to adequate health care.

“About 70 to 80 percent of all births here are supported by Medicaid,” Griffin said. “That area has already been cut some in an effort to help save money. We are the only hospital in the county offer OB-GYN services for deliveries. We want to continue to offer that service, but we may not have a choice.”

Pediatrician Marsha Raulerson said she may have to face closing her doors if the referendum doesn’t get a passing vote.

“I have a large Medicaid patient load,” Raulerson said. “About 70 percent of my patients are on Medicaid. If that program’s funding stopped, I’d probably have to close my office. It would be hard to continue operating for very long. But I’m not alone. Most primary care physicans would be in the same position. Our OB/GYNs, pediatricians and family medicine physicans all have a large number of patients who are Medicaid patients. It would be tough for everyone.”

Griffin said if physicians close, leave or just simply quit practicing because of the financial losses, everyone served by D.W. McMillan would lose.

“Of course, no matter what, we will try to figure out how to make it work,” Griffin said. “But even if we can figure it out, without the doctors you don’t have a hospital.”

“Any business that loses 25 percent of their business is going to see some significant issues,” Griffin said. “We’ve already made cuts and changes that have helped us with our bottom line. We’ve tried to be diligent with what we’ve done. The volume declines in the past couple of years forced us to make changes in staffing. Right now, our med/surg department isn’t staffed. To have that department fully staffed would take two registered nurses and four or five other people to fully staff it. That’s five or six people being paid seven days a week. We made that cut because we had to.”

That cut in staffing hasn’t caused the services to be cut, Griffin said. However, the department is staffed only when scheduled.

Raulerson said the Medicaid is already running a “bare bones program” with deeper cuts putting the health of the state’s children at risk.

“We are in a crisis,” Raulerson said. “We have already seen cuts and the programs we have just can’t be cut any more. This will impact the healthcare of our children. These kids are our future. If we don’t give them what they need, well, there goes our future.”

Raulerson was faced with an emergency situation Monday afternoon and used it as an example of how important a “yes” vote would be for the community.

“This child had gouged a hole in his tongue somehow and need to be seen by a surgeon,” Raulerson said. “When I called the hospital, no one asked what kind of insurance or even if there was insurance for this child. The surgeon didn’t ask about insurance. It was just natural to make sure the child received adequate, immediate care.”

Griffin said he looks at D.W. McMillan as a major part of the good things the city of Brewotn has to offer.

“We do view the hospital as a community resource,” Griffin said. “A private institution may have the luxury of choosing who their patients are and who they will see. We see eveyrone who needs care. It’s what we do.”

Griffin and Raulerson agree a “yes” vote on the amendment would allow the transfer of usuable funds for the state is needed – and needed now.

“What choice do we have really,” Griffin said. “We have to do something to help.”

Raulerson said the bleeding going on in the system has to be stopped.

“Just like the little boy with the bleeding tongue,” Raulerson said. “You have to stop the bleeding before you can move on to the next step of healing.”

Wounded sheriff back on the job