Wounded sheriff back on the job 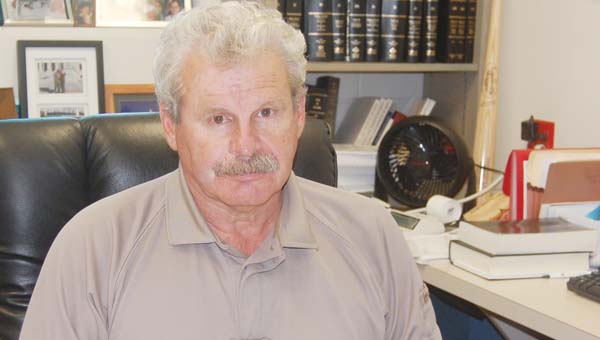 Sheriff Grover Smith sat behind his desk at the Escambia County Sheriff’s Department Monday — just three days after suffering a gunshot wound and only one day after being released from a Pensacola, Fla., hospital.

“I had excellent medical care at the scene, then at D.W. McMillan and at Sacred Heart,” Smith said Monday. “They removed the projectile and some debris then put a metal plate in. It’s sore, but it’s all right.”

Smith was struck by a stray bullet fired in a standoff situation in Flomaton Friday morning. The incident began when officers arrived at the Arrington Lane home of James Arrington Jr. to execute a pick-up on a mental commitment order from the probate judge’s office.

“When I heard what was going on I went down there,” Smith said. “We only have two people trained in using the non-lethal weapon used in this situation. I wasn’t going to send the other officer in there, so I went myself.”

Smith said he was as prepared for the situation as possible, taking every precaution available.

“I had on my bullet-proof vest and another officer was in front of me with a shield that would stop a .357 Magnum shot,” Smith said. “When the suspect fired shots, we took cover. The bullet that hit me came through a wall.”

Smith was taken from the scene and transported to D.W. McMillan Hospital Friday morning and was later transferred to Sacred Heart Hospital in Pensacola where he underwent surgery for his injuries.

“The bullet hit the bone and I basically had a broken arm,” Smith said.

“It was an unfortunate situation with a life being lost there,” Stokes said. “It is fortunate that no one else lost their lives. The sheriff’s office was just doing their job.”

Members of the Alabama Bureau of Investigation are continuing to investigate the case.