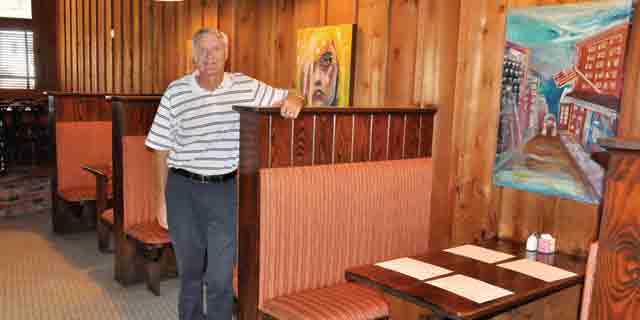 Joey Turner stands among the booths available for dining in historic downtown Brewton.

The iron gate that has been locked to the entrance of the Ole Willie’s restaurant is open again—this time with a new name and a new owner.
Joey Turner has opened the famous Brewton landmark and will call his new eatery JT’s.
“I actually worked here when I was in college for Buddy Liles,” Turner said of the building. “I think this building is a landmark building in Brewton. I think most people know, some maybe not, that it was a drugstore up until Buddy Liles took it and converted it into a restaurant. I just wanted to do something after I left the country club somewhere on the same lines of serving people. This just seemed like the perfect fit. Cheryl Najor also had this place and it was successful and it has a place in history for this building also. It is a place I visited and it was successful also.”
Turner said a grand opening event will begin Thursday, Sept. 20 and will cover a few days to allow the community to get acquainted with the staff and the men.
“It will be a grand opening weekend the 20-22,” he said. “That will be the first time we will be open for dinner. We are open for lunch right now from 11 a.m. to 2 p.m. everyday. That includes Sunday. We will be open everyday once we open from 11 a.m. to 2 p.m. then on Friday and Saturday nights from 4 p.m. to around 9 p.m. for dinner. We are going to start with a menu of steak and seafood. We will have some fresh fish of the day specials during those evenings and we will add to them as needed.”
So far, Turner said the response has been overwhelming—even before he opened the doors.
“The support we have gotten from the community has been great,” Turner said. “I would not have been able to do this without the help of a lot of people. I want to thank my family. They were a big part of it. The employees here have been outstanding. They have jumped in and embraced the situation of opening a new restaurant, which is a task in itself. I feel blessed that everywhere I have been, I have had wonderful employees. No one does something like this by themselves.”
As for his expectations for the new restaurant, Turner said he just wants it to be a place that people can come and enjoy themselves and have good food in a comfortable atmosphere.
“We will have a full-service bar,” he said. “We have big screen TVs for football and sporting events and that sort of thing. I just want it to be a place people think about when they want a place to be comfortable in and enjoy.”