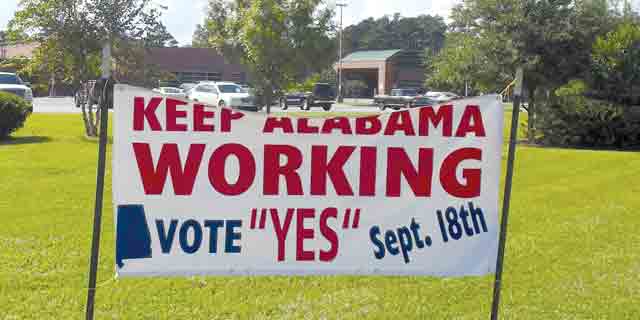 The announcement last week that Searcy Hospital, a treatment center for mental illness serving counties including Escambia, will close at the end of October has local officials mapping out plans for how to respond — a dilemma directly related to state budget issues.
Escambia County Probate Judge Emilie Mims, whose office is tasked with handling mental illness committment cases, said she has been in meetings this week with other judges to determine what strategy the county will use to make sure local residents do not fall through the cracks.
Mims said the bottom line with Searcy’s closing is that the state is no longer able to fund the facility, making Tuesday’s amendment vote to transfer money into the General Fund all the more critical.
“It’s certainly a personal decision as to how people vote, but personally I think it will have an effect, especially on the health care system, which flows down to the mental health system as well,” Mims said. “Many of our patients are indigent and Medicaid pays for their treatment. The state also pays for the attorneys for mental health patients and the guardians, so we could see budget cuts in all of those places. Budget cuts are what is driving these hospital closures.”
Mims said, in the wake of Searcy’s closing, some other options will be available to patients.
“They are taking some of the money from the closing of these hospitals and using it to beef up the resources available in the communities,” she said. “They talked about more in home teams that would visit the patients. They talked about a residential apartment here in Brewton that would provide meals now, and also provide some observation. Just all different kinds of things are being tweaked.”
Mims said she understand the concerns some have voiced over the hospital’s closing, especially in the wake of last week’s shooting of Escambia County Sheriff Grover Smith as he attempted to serve commitment papers to a Flomaton resident, but added officials will be doing everything in their power to ensure a smooth transition.
“It’s a fear, but the hope is that we will be able to identify them on the front end,” Mims said. “Right now we have Southwest Alabama Behavior Health Care Systems, which is located in Brewton. They have field workers now that go out to check on patients that have been released to outpatient treatment. When a patient deteriorates and maybe stops taking their medicine, or just is unmanageable in a residential community setting, that’s when they’re usually committed. But it is the job of the probate court and the mental health system to pick the least-restrictive means of helping them. We are to avoid those commitments if it is possible.”
Mims said she met Thursday with the Southwest Alabama Behavioral Care and South Central systems, along with five other probate judges in order to plan for the changes expected to come with Searcy’s closing.
“We met to discuss how we are going to move forward with treating mental health patients in those counties (which includes Escambia, Monroe, Conecuh and Clarke),” Mims said.
With last week’s announced closing date, officials with the Alabama Department of Mental Health said they would be working with patients in the days leading up to and following the hospital closing, trying to establish patients that qualify in residential mental health care systems.
“This all part of a big push to provide residential care to mental health patients closer to home. Not to institutionalize them,” Mims said. “This is a big move that has been underway since the 1970s. Alabama has just been able to avoid it by keeping our mental hospitals open, but now with the budget crunch, they’re looking to move patients to more residential settings.”
Mims said Searcy’s closing will mean Bryce Hospital in Tuscaloosa will be Alabama’s lone psychiatric hospital.
“(This move) does not mean that there won’t be a limited number of long term care patients,” Mims said. “They will go to Bryce in Tuscaloosa.”
According to officials with the ADMH, approximately 60 percent of Searcy patients are expected to move to residentially based programs. At maximum capacity the hospital holds approximately 290 patients.
In the end, Mims said, as always, patients will be treated on a person-to-person basis and decisions concerning commitments will continue to be made in that fashion.