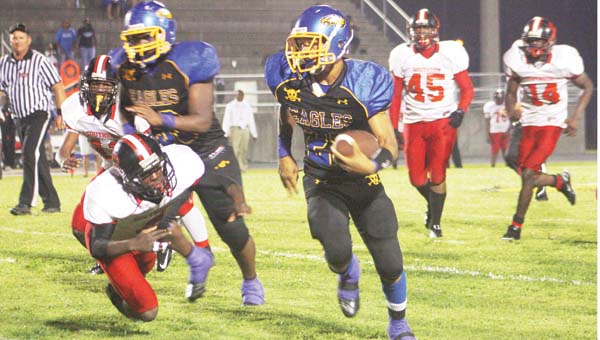 In a game that was dominated by W.S. Neal, the Eagles didn’t allow Southside Selma’s Panthers to put any points on the board until the fourth quarter.

W.S. Neal head coach Doug Hoehn said the team proved themselves on the field with a hard-played game, which saw the Eagles win 54-6 and improve to 3-1 (2-1 in region play).

“Our kids played well tonight,” Hoehn said. “This is the second week in a row for us. We’ve got a lot of young kids starting for us and they played better this week than last week.”

The scores on the board would support Hoehn’s assesment of the game. The Eagles put six points on the board in the opening minutes of the first quarter with a 38-yard touchdown by Marquese Banks. A fumbled snap foiled the two-point attempt.

The Eagles scored early in the second quarter on a blocked punt by Michel Williams.

Bringing in a half-time lead of 14 to 0, the Eagles were on a mission to beat the Southside Selma Panthers.

After the half, the Eagles put more points on the board just seconds into the third quarter. Trevor Burns scored six points on a 28-yard run, with Josiah Nettles bringing in two extra points on the conversion play.

Another score made it on the board for the Eagles when Nettles scored a touchdown of his on with a 2-yard run. Quenton Samuel made the two-point conversion run to bring the Eagles to a 38-0 lead.

Just six seconds into the fourth quarter, Banks made an 8-yard run for a touchdown with Nettles adding two points in the conversion run bringing the Eagles up to a 46-0 lead.

Southside Selma made their only successful run for the goal line just seconds behind Neal’s first fourth-quarter score.

A 22-yard run put a Southside Selma Panther across the goal line to put the only points on the board for the team.

The Eagles quickly answered the Panther’s score with another run of their own.

Zach Haveard made a 2-yard run to cross the goal line with Christian Purvis helping up the score with two points on a conversion.

The Eagles ended the game over Southside Selma by a score of 54 to 6.

Panthers Head Coach Daniel Flowers said his team worked hard in the game, but had to gain more than runs and stats to win games.

“We’re a young team and it was close at the end of the half,” Flowers said. “It was 14 to 0, and that’s close. The score on the board doesn’t show the work we’ve done. We have to work on building heart with this team. We’re going to keep working on it and what you saw tonight will be fixed. It’s never over, and we’ll be all right. We’ve just got to work on heart.”

W.S. Neal played a second week without 12 players who were suspended following on on-field incident with Straughn players in the second week of the season.

Hoehn said those team members who suspended for two weeks for coming off the bench during the game will be back in action next week against Hillcrest at home.

“We’ve got some good kids here,” Hoehn said. “They’ve got a lot of heart. They’ll be back and we’ll keep going.”