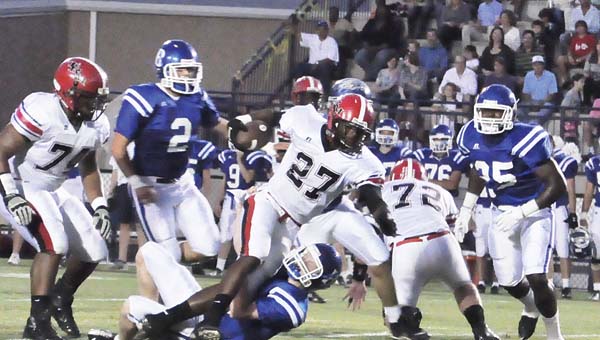 But Tiger defender Ryan Hunt knocked away the pass at the last second and preserved T.R. Miller’s narrow lead — and broke the Tigers’ losing streak against their region rival.

After Hunt’s quick action, the Tigers recovered the ensuing onside kick with 1:38 left in the game and ran that time off the clock for the two-point win.

The classic between the two region rivals was the third straight in the rivalry.

“I knew when we got the lead down there, they were fixing to bring whatever they had,” T.R. Miller Tiger head coach Jamie Riggs said. “And they did. We just made some mistakes down here. We gave them the fumble on our end of the field which really got them back in the game. You just can’t do those things when you want to win against good teams.”

Riggs said Hunt’s play is one the Tigers have worked on.

“Their quarterback just hung the ball a little bit,” Riggs said. “Ryan was able to come over on the play and get it done. I lost a game down at Straughn about 10 years ago because we hung the ball up there like that on the two-point conversion. It happens sometimes. I am just proud of him for making the play. Players need to make plays at the end of the game. Coaches can’t do that. Players have to do that.”

Things did not get off to a good start for the Tigers as Bayside ran the opening kickoff back 90 yards for a touchdown to give the Admirals a 7-0 lead seconds into the game.

From there, T.R. Miller scored 16 unanswered points behind two scores from Dominique Jackson and a Bayside safety on a bad snap over the punter’s head that was kicked out of the back of the end zone for a safety. T.R. Miller led 16-7 at the end of the first quarter and at half time.

T.R. Miller built a 30-7 lead in the third quarter and led 30-14 heading into the fourth quarter.

T.R. Miller led the Admirals 30-7 with 5:49 left in the third quarter, but the Admirals outscored the Tigers 28-7 the remainder of the game to cut the Tiger lead to 37-35 with just under two minutes left in the game.

In the fourth, the Tigers staved off the late Bayside rally for the win.

“Dominique did a great job tonight,” Riggs said. “We blocked them some, especially in the first half and down there in the third quarter. But we lost our momentum down there when they got going. We didn’t retake it down there like we should have. We have a lot of good things to build off of. We got awfully tired tonight and that was an issue with substitution and everything down there at the end of the game. We lost a few folks and it put some more folks in there to play. So hopefully some of them came through and did some good things for us.”

Kameron Coleman finished with 88 yards on 13 carries and two touchdowns.

Quarterback Kevin Davis was 4-for-10 for 114 yards and one touchdown.

The Admirals had only 39 yards of offense in the first half with 28 rushing and 11 passing.

In the second half, they torched the Tigers for 151 rushing and 94 passing.

“It is a big win for us in the region,” Riggs said. “There are four or five really good teams in the region and this was certainly one of the best ones. Like I said, if you can get one on the road, it is a pretty big win.”

T.R. Miller will travel to Clarke County next Friday for a non-region game.