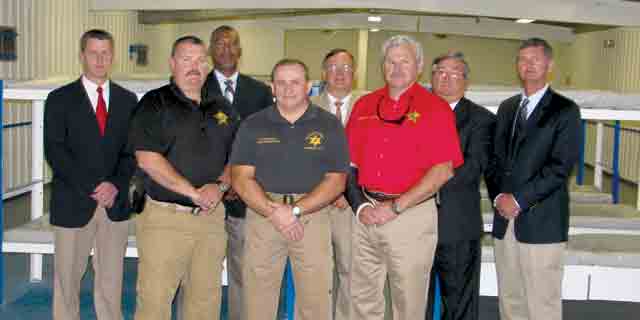 With a fresh coat of paint, some new furnishings and a change in set-up, work release inmates with the Escambia County Detention Center will be ushered into upgraded digs next week.

Escambia County Sheriff Grover Smith said the cost of the upgrades was minimal and will change the way work release operates.
“We have done the work with our own labor and upgraded the facility,” Smith said. “The work release inmates will only be in the facility if they have a job or are doing community service.”
Smith said inmates previously housed in the work release center included those who worked and those who were considered minimum-security inmates.
“We decided to only allow inmates in work release who could work and contribute to their upkeep,” Smith said. “We all worked together to make that happen.”
Capt. James Freeman currently oversees the work release facility and said the facelift was needed and will be beneficial for staff and inmates.
“Right now we have 28 beds set up to accommodate those in work release,” Freeman said. “We can add beds to the facility for as many as 50.”
Other changes in the facility will have an officer on the floor with the inmates, Freeman said.
“We’ve changed it so that an officer will be right on the floor with the work release inmates,” Freeman said. “Before, the officer on duty used to sit in an office where things went on that he couldn’t see or hear. We’ve put in two additional cameras for better coverage. One camera has been installed outside so that we can see who may be outside the building and another one installed inside for the blind spots in the building. We’ve also installed additional mirror for added coverage and a better way to keep an eye on what goes on in the facility.”
Smith said the facility would be locked down daily as inmates went out to work.
“I see the facility being empty by around 8 or 8:30 every morning when the inmates check out to go to their job,” Smith said. “The officer on duty then would report to the main detention center for the day. The building would be locked down and closed while inmates are out working. We would have an officer coming back to the work release facility at about 3 p.m. to open the building back up for check ins and the workers return from their jobs.”
With work complete on the facility, Smith explained the process and the benefits to members of the Escambia County Commission.
“We’re proud of what’s been accomplished here and I’m thankful to have the opportunity to do this kind of work,” Smiths said. “The sheriff can’t do anything without the support of the commission. I’m pleased to have the opportunity to share our progress with the commissioners.”
Inmates have been out of the building during the upgrade process and are expected to be returned to the building in the coming week, Smith said.