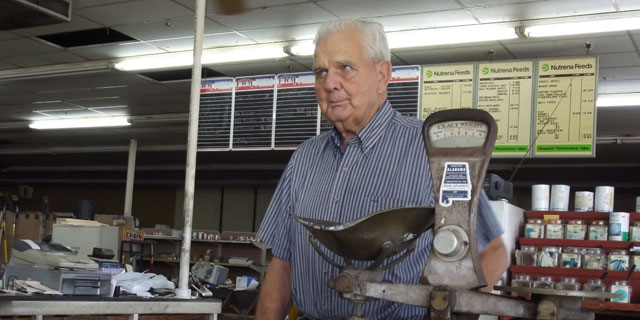 Homer Douglas stands at the counter ready to serve farming customers during the last days of a business that has become an icon in the city.

The close of business today at Farmer’s Exchange will mark the end of an era — a family legacy of serving the needs of countless farmers across the region.
After more than 60 years of serving their customers in the Brewton and East Brewton are, owner Homer Douglas and his son, Eric, have decided to close the doors — ending their long history in the community.
In the beginning the business was owned by several partners, but Homer Douglas, began buying the shares and eventually became the sole owner. Later his son, Eric, would also work in the store.
“I know that there were several owners over the years,” Eric said. “Dad began working in the store in 1955. He had worked at St. Regis and some construction work, but he had helped out at the store off and on. While he was doing construction, he helped to build the paper mill here in Brewton.”
Farmer’s Exchange was a familiar sight on the corner of St. Nicolas Avenue and Persimmon Street for many years, moving to its present location in 1989. The new location had been occupied by a Piggly Wiggly grocery store, and many of the display shelves today were, at that time, filled with grocery items.
Eric said that during the 1940s and 1050s there were a lot of small farms throughout the area and business was pretty good.
“In those days, anybody who had even a small patch of ground wanted to plant some sort of crop,” Eric said. “The majority of the farms had maybe a cow, a pig and  some chickens. People planted to feed both the livestock and family members. Everyone who had as much as a quarter of an acre planted at least a garden. These people depended on having a crop every year, both for sale and to use in their own homes. Even those who lived on the outskirts of town had a garden. Each little home was able to sustain themselves with whatever they grew. Farmers Exchange was there for seeds, fertilizer, farm tools and anything else that was used on the farm.”
Eric said today’s agriculture has shifted from the family farm to large corporations. Things are regulated by the government and the small farms have been put out of business.
“When I started at Farmer’s Exchange, it served a large area but all of that has changed now,” Homer said. “I am 88 years old and can’t do as much as I want to. If I was only 70 I wouldn’t be closing the store.”
Long-time patron of Farmer’s Exchange Aubrey Adams said he remembered when times were tough for everyone but the store and Homer Douglas was there to help out.
“I can remember coming in the store and telling Homer that I needed a few things, but I was a little short on money,” Adams said. “I told him I would pay him back as soon as I could. I might have a bill of $40, but back then a sack of feed didn’t cost but a couple of dollars. Farmer’s Exchange was one of the few businesses that would let you have something on credit. That just doesn’t happen anymore.”
Homer said the site on St. Nicholas, as well as the current site, are both located in a flood zone, but over the years, just with all the businesses downtown, they have learned how to handle it.
“We have several high water marks on the wall,” Homer said. “We just learned to move everything we could to higher shelves. Where we are is a great location for a business, but it needs some work.”
Even though the building needs work and upgrading, both Homer and Eric Douglas say they will miss being there.
“I don’t know what I will do when I can’t come down here and sit around and talk with customers,” Homer said. “It’s going to be different.”