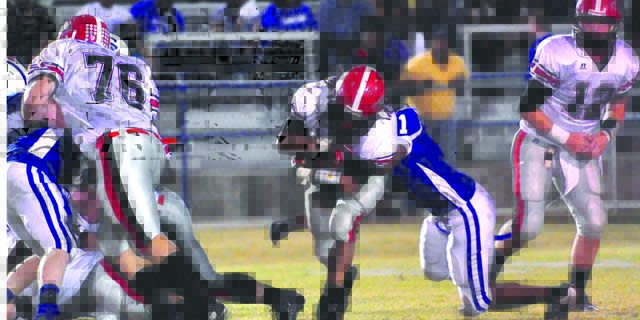 Many football games are won or lost in the locker room at halftime. Coaches scramble to make adjustments on both sides of the ball and head coaches cajole their players with animated gestures and words of instruction. Over the years, there have surely been some memorable – if not legendary – halftime “challenges” from T.R. Miller head football coach Jamie Riggs, some of which could make the most seasoned Tiger squirm in his seat.
So when the Tigers found themselves on the short end of a 7-6 halftime score at Clarke County High School Friday night, and their defense trying to find a way to stop Bulldog workhorse Airion McRae – who had already torched them for 114 yards on 15 carries and a touchdown – another in a long line of gauntlets was thrown down by Coach Riggs.
The response was typical “hit ‘em in the mouth” T.R. Miller football, which eventually led to a 19-7 victory for the Tigers. The win came after the Tiger defense shut down McRae, limiting him to 29 yards on 10 carries in the second half; in the meantime, the Tiger offensive line paved the way for an enormous advantage in time of possession over the final two quarters, including holding the ball for nearly 10 full minutes of the fourth quarter. Along the way, unbeaten T.R. Miller – 5-0 and ranked third in Class 3A – scored a couple of touchdowns in the second half to hold off the hosts.
“We challenged them pretty good there at halftime,” admitted Riggs, whose team has now won 30-of-33 against Clarke County. “In fact, when we were through talking to them, we looked back in the room and noticed nobody was leaving to get on the bus so we all came out in the second half and took control of the game.
“I thought our offensive line did a phenomenal job over the last two quarters, and our defensive coaches and players did a great job of adjusting some things to hold them at bay. We just kept fighting and we won because we got tough and played like T.R Miller.”
While the Tiger offense struggled to get things going in the first half, where they managed just 47 total yards, they reeled off 184 rushing yards over the final 24 minutes and controlled the clock by keeping possession for twice as long as the Bulldogs behind a determined offensive line. In fact, T.R. Miller’s offense was on the field for 11 of the final 12 minutes of the game.
“I thought that was certainly key for us,” said Riggs of his offensive efficiency over the final quarter. “Clarke County’s defense got tired and we controlled the line of scrimmage and just wore them down. We had the ball a long time.’
The Tigers looked to take control right away over the final two quarters when they came out of the halftime break. McRae’s touchdown, which came on a 43-yard run in the first quarter, gave Clarke County a 7-0 lead. And even though Dominique Jackson answered right away with an electrifying 85-yard return of the ensuing kickoff, the excitement was dampened when the Tigers missed the extra point to preserve the host’s 7-6 lead. And the way McRae was going, it didn’t seem like the Tigers would have many chances.
But with its renewed sense of purpose after halftime, the Tiger offense scored quickly on its first possession. On second down, Jackson, who led his team with 86 yards on 11 carries, swept around left end and was sprung free by a jarring crack-back block from Brett Smith that sent him on the way to a 52-yard scoring jaunt barely two minutes into the third quarter. T.R. Miller tried a two-point conversion but failed and the score was 12-7.
As the fourth quarter came around, T.R. Miller took possession with 11:54 to play, holding on to the five-point lead. Thanks to great execution down the stretch, the Tigers put together a 12-play, 7-minute drive that culminated in a two-yard blast up the middle by McHenry Coleman. Trey Salter’s PAT made it 19-7.
Still with plenty of time left, Riggs elected to take a risk on an onside kick with more than five minutes to play, and smiled as it paid off. Salter booted the perfect ball and junior Kardarius Jones was there to scoop up the ball after it caromed off the unsuspecting Bulldog player.
In trying to run out the clock, the Tigers converted three third-down conversions and two others on fourth down, and chewed up more than five minutes at the end of the game to preserve the win.
“I’m really proud of our players and coaches tonight,” said Riggs. “I thought, again, we made some nice adjustments at the half and our defensive coaches and players held them at bay.
“But I can’t say enough about our offensive line and the job those guys did to help us eat up a lot of clock in the second half. We may not be very good all the time but we do have some toughness to us and sometimes it’s better that way.”
The Tigers will return to region play next week as it hosts Cottage Hill for homecoming at Brewton Municipal Stadium.
Kickoff is at 7 p.m. in Brewton.