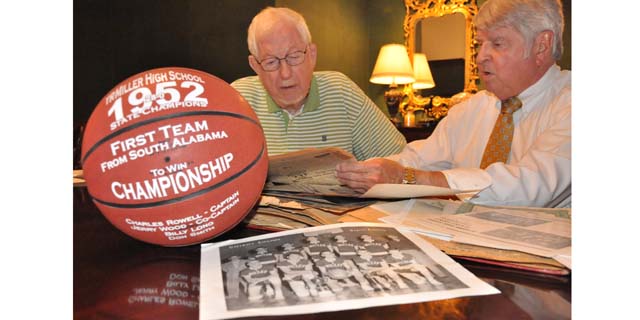 “T.R. Miller has had better individual players, but never a better team that played as a unit.” That is the quote Tiger head basketball coach Hal Wyatt made to the Mobile paper after the Tigers defeated Priceville 56-44 for the Alabama class A title in 1952—the first for a team from south Alabama at the time and the only team to date to win a boys championship for T.R. Miller.
The Tigers of 1952 went 28-0 winning the district title 61-32 over Baker in Brewton.
In the playoffs, T.R. Miller won the first round game over Hackneyville 70-37 and then squeezed by New Hope in the quarterfinal round 54-52. In the semifinals, T.R. Miller defeated New Brockton 48-47 in overtime. In the finals, T.R. Miller defeated Priceville at Foster Auditorium on the campus of the University of Alabama for the championship.
Team members included: Charles Rowell, Charles Ray McLellan, Jerry Wood, Joe White, Billy Long, Larry Smith, Don Smith, Lavon Rigby, Mark Sowell and Jerry Kelly.
Long, White and Don Smith made the all-tourney team for T.R. Miller.
Six of the 10-member team are still alive with Rigby and Kelly still living in Brewton.
White went on to play LSU and Kelly played at Alabama. White was a junior on the 1952 team with Kelly being a sophomore.
The two met in Brewton last week to discuss plans for the reunion and reminisce about the 1952 season.
“There were two sophomores, four juniors and four seniors,” White said. “Charles Ray McLellan was one of the best athletes. He could have went on and played Division I football, but he was down-home boy. I fouled out against New Brockton and Charles Ray came in for me and with 15 seconds left in overtime, he hit two foul shots to win after we were down by one point.”
White said 60 years is a long time, but it is something he will never forget.
“It was a special time for us,” White said. “We won the Alabama state championship and we were the first team to win the state championship from south Alabama. T.R. Miller’s boys have never won one since. It was just a special time. We had team. We had 10 members and everyone of them contributed. We just had a lot of pride.”
The 1952 team won 28 straight games in 1952 and won 27 straight the next season before losing to Ragland the next year in the first round of the playoffs.
“You had a coach that was ahead of his time,” Kelly said of head coach Hal Wyatt. “He preparation to get his kids in condition to play. Year after year, he carried them to the state tournament. I don’t know how many years in a row. We went 10 or 12 years and he worked you hard and he made you play team ball mainly. He was a good one. He was an Auburn graduate and was in Brewton for a number of years. Every 25 years you have a player in Brewton that is good enough to play Division I. On that team, you had three or four athletes that were good enough. I thought a lot of coach Wyatt’s ability.”
The team will hold their 60-year reunion this Friday with festivities planned throughout the day. The team will meet at Kelly’s house at 11:30 a.m. for a lunch gathering and will also have a float in the parade.
“Coach was the primary reason that we won,” White said. “He took a small group of boys and made them winners.” 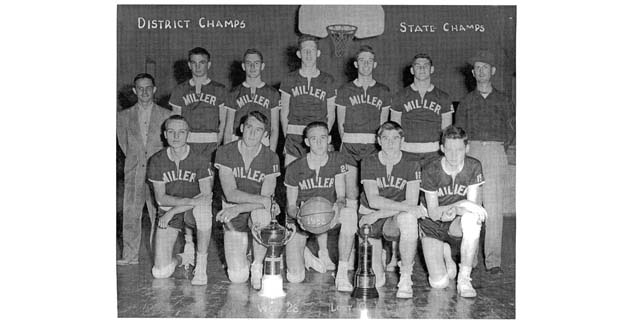 Hoehn and WSN Eagles to travel to Excel Friday…