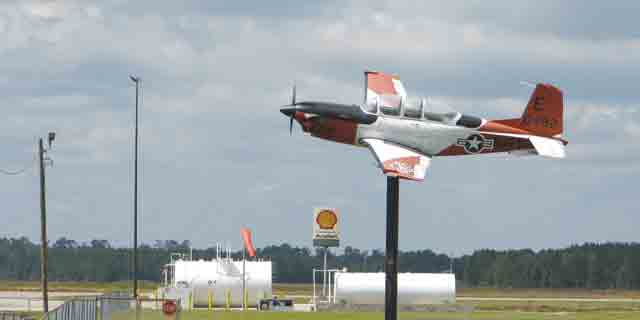 Planes and automobiles may be the link to growth for Brewton and the region. With an active airport and close proximity to major highways, the city has the potential to offer the connections that create economical expansion.
Both candidates for Brewton mayor, Yank Lovelace and Frank Nalty, have touted the need to improve transportation infrastructure — but some of those plans might take many years to come to fruition.
Brewton Mayor Ted Jennings said the ownership of the Brewton Municipal Airport and recent improvements along U.S. 41 north of Brewton puts the city in a position to be among the elite in small town Alabama.
“We really do have one of the finest airports of any small city in Alabama,” Jennings said. “When Gov. Bob Riley visited here and came into the airport, he was really impressed with what we have to offer.”
The city’s ownership of the airport facility is a fact that puts Brewton on the map as a contender for future growth and opportunities.
“With the airport, we are in a good position to be able to pursue some additional business,” Jennings said. “We’ve had to overcome a lot of problems through the years with the airport, but we’ve worked really hard and it has gotten us to the point we are at today. We have put a lot of work into the airport and we’ve put ourselves in a position that will allow us to take advantage of the Airbus contractors in Mobile and in other places.”
Jennings said the airport is a jewel in Brewton’s crown and is an asset for more than just one city.
“Our airport has the potential to be a big asset — not just for Brewton but for the area around us,” Jennings said. “Hopefully a new administration will work hard to stay on the right track and make that happen.”
The Alabama Department of Transportation has recently completed a $4 million project along U.S. 41 north of Brewton to install passing lanes for increased traffic along the route that links I-65 to points south and beyond.
Those improvements are just part of a plan that Jennings said would be a powerful piece in a puzzle that would put Brewton in the path of success with a four-lane highway.
“We’ve been on the list and off the list over the years,” Jennings said. “Getting a four-lane is just one of those things you’ve got to constantly work at to push forward. It could be put back on the list at anytime. It’s just going to take going to Montgomery and working with people to get id done.”
Both Lovelac and Nalty have said they are ready to work with — and have already met with — transportaiton officials on a four-lane route to Brewton.
But while four-lane access is a priority for the city, it is not currently on the top of the Alabama Department of Transportation’s priority list.
Tony Harris, media and communications representative for the Alabama Department of Transportation said a four-lane route along U.S. 41 is not in the foreseeable plans of projects on the board.
“We’ve just completed a commitment with Gov. Bob Riley to widen Alabama 113 from Flomaton to I-65,” Harris said. “When you can drive a four-lane highway a short distance to Flomaton and further south on improved roads it’s highly unlikely it will happen soon.”
Jennings said a four-lane route along U.S. 41 is certainly a dream with recent improvements at least heading in the “right direction.”
“Access to I-65 is going to be one of the critical things we’ve got to get done,” Jennings said. “The passing lanes have helped, but it’s just not the same. We are headed in the right direction, but we have a ways to go. Having access to I-65 would be an economic stimulus for us and everyone around us.”
Jennings has served as chairman of the FAST program, working on four-lane roads from Florida into Alabama — a venture he said would be beneficial to the entire area.
“I’ve been working with them on the Florida side and things are moving,” Jennings said. “There will be a four-lane all the way from Ft. Walton to Milton and on into Brewton. We’re working on that as a regional thing. That kind of work takes working with Washington leaders to make things happen.”
Although cost is certainly a factor, bringing a four-lane road through Brewton and East Brewton may be cost prohibitive for some time.
“The downside is that a four-lane road is expensive enough,” Jennings said. “But, when you look at a by-pass that would go around downtown Brewton and East Brewton, you have to go through wetlands. The cost of that would be astronomical. But, if it’s looked at as an evacuation route for the people in the Florida panhandle, it’s critical for them and for us.”