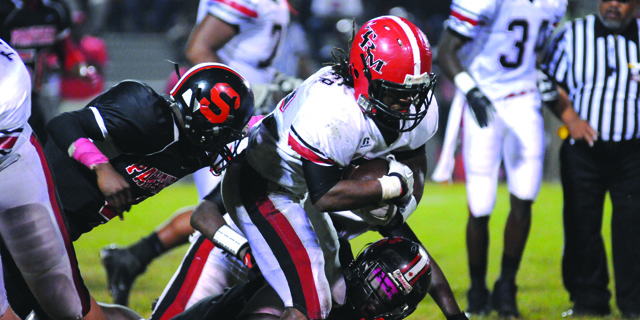 By Robert Hudson
The Selma Times-Journal

SELMA — In a game that was tight for about a half, the No. 2 T.R. Miller Tigers pulled away for a 48-18 win over the Southside Panthers in a region game on Friday.
Tigers’ head football coach Jamie Riggs, said his team got off to a slow start, but eventually got rolling.
“It took us a little while to get going there. They did some things early to hurt us, and we actually had a good plan of things, I thought, but we didn’t have the ball much in the first quarter,” Riggs said. “When we finally got the ball in the second quarter, we were able to get something on the board and take control of the line of scrimmage a little bit, and that really helped.”
The Tigers (7-0, 4-0 Class 3A-Region 1) struck first early, as Dominique Jackson capped off the team’s first drive with a 7-yard touchdown run, as the extra point by Trey Salter made it 7-0 with 3:30 left in the opening quarter.
Southside (1-6, 1-4 Class 3A-Region 1) responded on its very next possession when quarterback Khamari Gibbs found Derick Daniels, who then broke a pair of Tiger tackles and scored on a 50-yard touchdown. The Panthers missed the 2-point conversion to make the score 7-6 with 8:00 left in the first half.
The Tigers answered right back on the next drive, marching 61-yards down the field and scoring on a 2-yard touchdown run by Kameron Coleman that made the score 13-6 with 5:11 left in the first half.
After forcing a Southside punt, T.R. Miller scored again, this time on a 25-yard touchdown run by Jackson that made it a 20-7 game after the extra point with 3:55 left in the half.
The Tigers added one more touchdown in the half, as quarterback Kevin Davis found Coleman as time expired for a 26-yard touchdown pass that made score 27-6 at halftime.
Davis threw a 44-yard touchdown pass to Keion Smith on the first play of the second half that extended the Tigers’ lead to 34-6.
T.R. Miller’s final two touchdowns came on a 15-yard touchdown run by Jackson in the third, and a 7-yard touchdown run by Markail Mitchell in the fourth.
T.R. Miller will travel to Straughn next Friday for a key region game. Game time is set for 7 p.m.