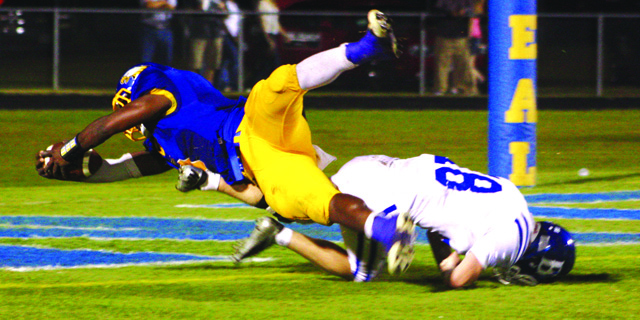 W.S. Neal had three running backs eclipse the 100-yard mark and totaled 309 yards rushing in the second half alone but had to hold off a late Bayside Academy rally to stun the No. 9-ranked team in class 3A 44-42.
W.S. Neal (6-1 overall and 4-1 in region play) led the Admirals (3-4 overall and 3-2 in region play) 44-23 with 10:53 left in the game.
From there, Bayside Academy would score 19 unanswered points to cut the lead to 44-42 with 1:27 left in the game after a failed two-point conversion.
W.S. Neal would recover the onside kick and run the final seconds off the clock for the win.
“This was a big win. It is the biggest win since I have been at Neal,” W.S. Neal Eagle head coach Doug Hoehn said. “I want to start this off by congratulating Bayside, coach Lazenby, his assistant coach and his player. I give them a lot of credit. They are a very polished football team. They are the type of program you want your kids to be. Their kids played their guts out. They don’t make mistakes. I just want to give them all the credit in the world.”
Hoehn said despite the comeback by the Admirals, his kids were not going to give up.
“I told them all week long it is highs and lows in this game when two good teams play,” he said. “I think we are at the point where we are starting to be a good football team. We are not where we want to be yet. We are still learning football, but I tell you what, we are getting to where we want to go. They bought into that. They understood lead changes and onside kicks and all that. Bayside is deadly with the onside kicks but I think we did a good job. We only lost one of them and got one ourselves. I am just proud. It is Friday night football. We have a great atmosphere. Our stands are always packed. Our band and cheerleaders are awesome. People come here and the compliment us on our facilities and it is just a great facility and it good to see the pride back into this football program. I am just very proud of our players and our community and our assistant coaches.”
Hoehn said the win says his team is learning how to play football and that they are maturing.
“I don’t like the turnovers we had at the end of the game to let them back in it, but that is part of the valleys and the ups and downs you go through and the mountains when you are rebuilding a program,” he said. “We are getting more physical and more sound in what we do. There is going to come a time when we don’t make those mistakes. If we put four quarters together without the mistakes, I think we have a chance to be a good football team this year.”
Marquese Banks, Josiah Nettles and Quinton Samuels all had over 100 yards rushing for the Eagles with Banks leading the way with 189 yards on 24 carries and two touchdowns. Nettles had 154 yards on 14 carries and one touchdown and Samuel had 104 yards on 11 caries and three touchdowns.
The Eagles totaled 439 yards of offense in the win with 432 yards coming on the ground.
W.S. Neal had 123 yard rushing in the first half and 7 passing while 309 yards came in the second half—all on the ground.
“We don’t hide what we do,” Hoehn said. “We like playing physical football. We have a bunch of kids that want to run the football and we have confidence in all of them. But what makes the whole thing is the offensive line upfront. Our defense does a good job of getting folks off the field.”
Bayside had 282 yards in the loss with 147 on the ground and 135 in the air. The Admirals had 87 yards of offense in the first half with 33 rushing and 54 passing. In the second half, Bayside totaled 114 rushing and 81 passing.
“I think we played well on defense,” Hoehn said. “It was the turnovers that got us. I think if you look at the grand scheme of the game, the first half we gave them nine points off turnovers. In the second half, we gave them some scores off turnovers. Besides that, we had sever four-and-outs. Bayside runs a Wing-T offense with a lot of movement and you have to play sound defense. We had one week to prepare for it. I am happy for the kids. They bought into. They are a very good football defense and their quarterback is good and hard to deal with.”
The win for the Eagles surpassed their win total from the past four seasons combined and this is the most region wins since 2007.
W.S. Neal will host Opp next week for homecoming. Game time is set for 7 p.m. in East Brewton with homecoming festivities set throughout the day.
“I think it is a good win for the program and I am happy for the kids,” Hoehn said. “I told them to enjoy it this weekend. I am going to enjoy it but tomorrow I am going to think about Opp.”