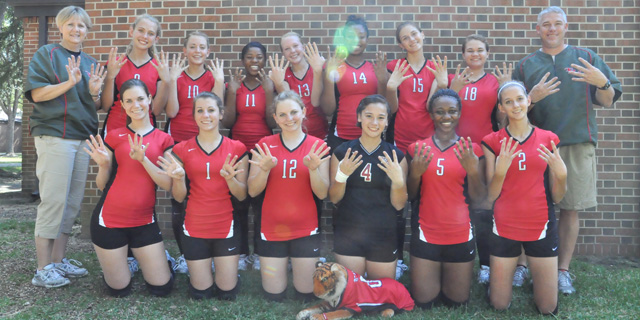 It was a new location but the same result Saturday in the 2012 Escambia County volleyball tournament as the T.R. Miller Lady Tigers made it eight straight championships over county teams as they went 3-0 in the tournament at JDCC.
The Escambia County volleyball tournament began back in 2005 and every year since the tournament began, the T.R. Miller Lady Tiger volleyball has been crowned tournament champion.
The Lady Tigers started the tournament with a 2-0 win over W.S. Neal, winning 25-23 in set one and 25-18 in set two.
In their second match of the day, T.R. Miller defeated Escambia County 2-0, winning set one 25-14 and set two 25-21.
In their final match against Flomaton for the county championship, the Lady Tigers won 2-0 to get the championship. The Lady Tigers won 25-12 and 25-18.
Overall, T.R. Miller took first place in the tournament with a 3-0 record followed by Flomaton in second place with a 2-1 record and W.S. Neal in third place with a 1-2 record. Escambia County placed fourth as they went winless at 0-3.
In other tournament games Saturday, Flomaton defeated Escambia County 2-0 (25-16 and 25-13. Flomaton defeated W.S. Neal 2-1 (20-25, 25-10 and 15-7). In the final game of the day, W.S. Neal defeated Escambia County 2-0 (28-26, 25-16).
T.R. Miller’s overall record improved to 11-7 as they ended the regular season with a seven-game win streak. W.S. Neal fell to 6-13.
Both teams were scheduled to play in their area tournaments this week at Bayside Academy.
“The last month we have kind of figured our roles and the kids have really bought into what we are doing and everyone has accepted their roles,” T.R. Miller Lady Tiger head coach Greg White said. “We got on a roll and it has kind of worked. We had a chance to tank it earlier in the season, but we didn’t and they just kept fighting and battling and working hard and we finished with a seven-game winning streak. Winning this thing eight years in a row is a big thing and I am proud of them for that.”
White said if anyone would have asked him earlier in the year about his team winning the county championship again, when their record was 4-7, he probably would not have been able to answer it.
“If you had asked me if we would have won this back in early September, I don’t think I could have answered that with a yes,” White said. “They showed a lot of toughness over the season and they hung in there and I am extremely proud to have eight in a row. It is quite an accomplishment and I am extremely proud of it. The games today went well. I thought we had a slight advantage on the net and that was our game plan to feed our hitters. We did a very good job of that. We got kind of sloppy in one game with that against Atmore, but the rest of the day, we got better. We were able to put a lot of pressure on their defense and able to score a lot of points that way. I am proud of them for executing the game plan. I am just very proud.”
W.S. Neal head coach Jeff Haney said his team just continued their rollercoaster ride Saturday.
“We have been up and down all year,” Haney said. “You never know which team is going to be on the court. We didn’t do enough to get the win today. If we play like we are capable of playing, we can be the best team in the county. Today we weren’t. Congratulations to T.R. Miller on their county championship. I hate it, but it is what it is. We just have to come out and get ready for Cottage Hill Thursday.”

TRM 2, ECHS 0
In their second game of the day, T.R. Miller defeated Escambia County 2-0.
In game one, T.R. Miller started out with a 12-0 lead before winning 25-14.
Roberts led with 12 straight points and two aces with one kill.
In set two, Moriah Brundidge led with 10 service points and three aces.

FHS 2, WSN 1
In W.S. Neal’s second game of the tournament, the Lady Eagles lost to Flomaton 2-1.
In set one, Crook led with three points, one ace and one kill in the loss. Lambert had four kills.
In set two, Johnson led with nine straight service points and one ace in the win. In set three, Jodi Busby led with one service point.

County volleyball tournament to be held today (Saturday) at…