Stunt pilot at home in the sky 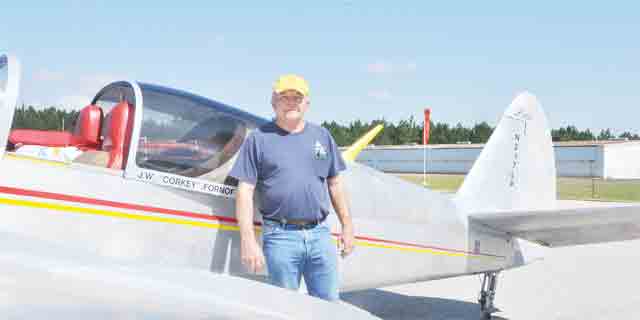 Corkey Fornof makes his home in the sky and on movie sets. But on the ground he appreciates the hospitality of the Brewton Airport.

Corkey Fornof jokes that he is the “ugliest woman you ever saw.”
Fornof, a stunt pilot who makes the Brewton Airport a refueling stop whenever he can, has doubled for everyone from the James Bond actors to Catherine Zeta Jones during his 45-year career in the film industry.
“I’ve been a Bond girl,” he said.
Fornof has worked on 46 feature films, as well as a number of commercials and TV programs. He was the pilot that “crashed” the plane that stranded Harrison Ford and Anne Heche on a deserted island in “Six Days and Seven Nights.”
Currently based in Dallas, Fornof also works on air shows across the country.
Fornof got his start as a stunt pilot 45 years ago, happening into the film industry “by accident,” he said.
“I got a call in 1967 from ABC to do some aerobatics,” Fornof said. “After that I starting getting phone calls to do stunt work. I’m getting ready to do some scouting in China for a movie directed by John Woo.”
So how does a pilot who travels the world find his way to Brewton? Fornof makes a stop at the Brewton Airport when he can, he said, because he appreciates the hospitality from airport FBO managers Freddie and Darlene McCall.
“I became friends with Freddie and his wife sometime back when I got weathered in,” Fornof said. “They were so kind as to welcome me and even offer me the use of their car.”
Fornof said the Brewton Airport is a great asset to the city.
“I hope you know how valuable this airport is to the people in this town,” Fornof said. “It can be a lifeline. I was living in Valencia, Calif., when one of the biggest earthquakes hit. The airport was shut down. Then the problem was that help couldn’t get to where it was needed. There was no way to get materials to those areas.”
Fornof was born in New Orleans and has lived in several places, with Dallas being his home now.
He said he was very impressed with the way the Brewton Airport is operating.
“I have flown to lots of airports, but the service here in Brewton is some of the best,“ Fornof said. “When I flew in, before I even got a chance to turn the engine off, someone was there to help me. You don’t get that service every place you go. I have been talking with Freddie and I am going to try to arrange it to come back here at next year’s fly-in.”
On his most recent visit, Fornof made a stop as he was headed to Florida for an air show.
“Any time not in the air is wasted time — except for the time I spend with my wife and daughters,” he said.