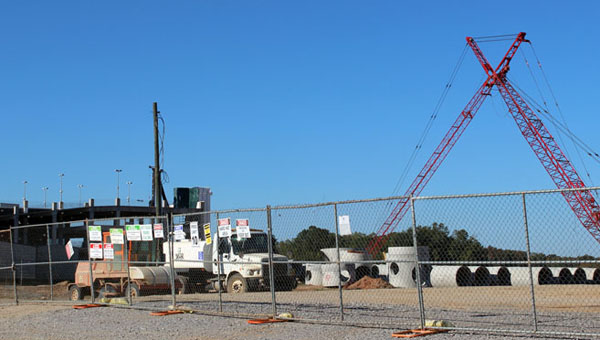 Construction was halted Tuesday at the Poarch Creek Indians’ planned $246 million casino expansion in Wetumpka following an agreement between the Atmore-based tribe and the Oklahoma-based Muscogee Creek Nation.

The project “will not proceed until further notice,” according to joint statement released by both tribes.

“The decision to halt construction was made to show a measure of good faith from the Poarch Band of Creek Indians after a request from Principal Chief George Tiger,” according to the press release.

Sharon Delmar, public relations and tribal liaison for the Poarch Creek Indian tribe, confirmed the details of the press release, but declined further comment on the matter.

“Our Tribal leadership has a meeting scheduled with the Muscogee Creek nation’s leadership in the next few days. We will have a comment after that meeting,” according PCI’s official statement emailed Wednesday morning.

The press release stated the construction stoppage includes removing construction personnel, park equipment and measures to ensure the safety of the site.

The halt to construction was agreed to in an email from Poarch Band Attorney General Venus McGhee to Principal Chief Tiger’s Legal Counsel Yonne Tiger. McGhee’s office referred calls for comment to Delmar.

Large cranes and other construction equipment were still on site Wednesday morning, but no action was visible in the fenced-off construction area surrounding the casino’s parking deck.

The planned Wind Creek Wetumpka hotel, resort and casino was announced July 11. The 20-story hotel was to have 285 rooms and the completed complex was expected to employ around 1,000. The opening date was scheduled for New Year’s 2014.

Management at Creek Casino Wetumpka referred all questions to tribal offices in Atmore.

On Oct. 12, the Inter-Tribal Council of the Five Civilized Tribes — an organization uniting the tribal governments of the Muscogee Creek, Chickasaw, Choctaw, Cherokee and Seminole nations — unanimously passed a resolution calling on the Poarch Band to “halt the desecrations and all future desecrations of Hickory Ground Ceremonial Ground/Tribal Town located in Wetumpka, Alabama, as should be afforded protection under federal laws.”