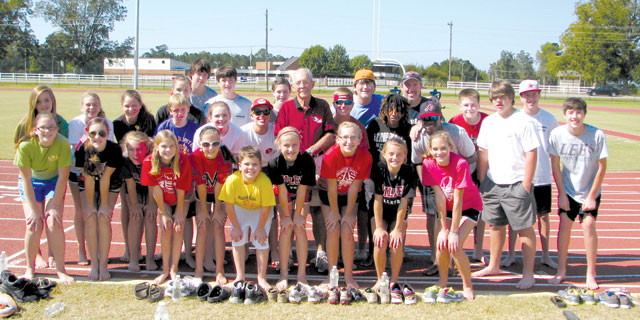 If estimates are correct, more than 200 people in need will be wearing better shoes — thanks to the efforts of the CLAIM ministry group of First Baptist Church of Brewton.
Youth Minister Randy Winton leads the group of teens that decided gathering shoes would be a worth cause that would fill the need for many without resources to meet their own needs.
“We had heard from Dr. Robert Hayes about his involvement with the Waterfront Rescue Mission in Pensacola, Fla., for a few years,” Winton said. “After we heard him talk about the need for shoes in the Pensacola area, the students decided to take on this project on their own.”
Winton explained Hayes had related a story concerning the death of his two sons and a grief that grew into his involvement at the Waterfront Rescue Mission.
“After he told us the story of how he came to work with the Waterfront Rescue Mission, he explained the needs of so many — including the homeless — throughout the community there,” Winton said. “That’s when the students came up with this idea. It was really their project from the beginning and it ended with a very successful result.”
Winton said a large number of students — and even several adults — made their way to the new track at Brewton Municipal Stadium Saturday to take a walk without shoes to bring attention to the need.
“This is a brand new track and it’s still pretty rough,” Winton said. “It hasn’t been smoothed down by age and it was really rough on bare feet. This was a great learning experience for the students and for the adults who joined in for the walk. We all had sore feet the next day and that was part of the idea — to gain an appreciation for what people lest fortunate have to deal with on a regular basis. We just don’t realize, sometimes, just how blessed we truly are.”
Winton said the 30 students were able to accomplish a common goal by teaming up to reach out to others.
“This success for this team goes way beyond a team winning on the football field, or baseball field or any other sports arena,” Winton said. “This is the kind of team work that does something to help another human being and making someone’s life better. That’s the goal we wanted to accomplish with this project for the students.”
Winton made the trip to Pensacola to deliver the more than 200 pairs of shoes collected in the shoe drive Monday. That trip, he said, further confirmed the importance of the kind of drive held by the CLAIM group.
“This was our first time for this kind of event,” Winton said. “The donation we made to Waterfront was very much appreciated. This community is becoming more and more known for their generosity. Brewton has a reputation for being a big giver. When someone is in need Brewton residents help. The people were so appreciative of the donation we made to help those in need. Those kinds of deeds are what we work for in our youth. To show people you care without even knowing them.
‘Our students have shown that kind of love for people they don’t even know through their acts of generosity.”
Winton sad the students plan to continue their work to help those in need in the area as well as those in need throughout the region.
“This is what our youth ministry is all about,” Winton said. “To learn how to care for people and to have the same love for everyone — just like Christ.”