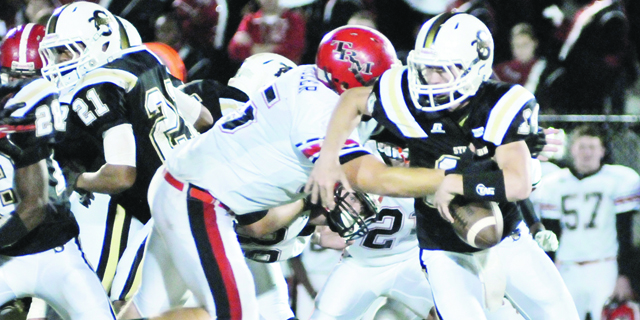 By Andrew Gardner
special to the standard

STRAUGHN — Even Straughn’s coach had to admit that T.R. Miller’s winning play Friday night was a gutsy call.
T.R. Miller — ranked No. 2 in Class 3A — scored less than a minute to go to take a 19-17 win and not only preserve an unbeaten season but also win its first region championship since 2008.
Straughn had battled back from a 13-0 deficit to cut the game to a touchdown in the first half, added a field goal and a touchdown to take the lead with more than two minutes left in the game.
Then TRM drove the ball down the field some 58 yards, where the Tigers found themselves at fourth down and three yards to go with less than 35 seconds on the clock and with no time outs.
T.R. Miller coach Jamie Riggs put the ball in 5-foot-7, 150-pound running back Dominique Jackson’s hands.
Jackson careened 16 yards for the go-ahead touchdown with 28.2 seconds left, scoring his team’s third touchdown of the night.
“It took a lot of guts to call a run (play),” Straughn coach Trent Taylor said.
With the loss, Straughn falls to 5-3 overall, and 3-2 in Class 3A, Region 1. T.R. Miller is 7-0.
Straughn came out and played a noticeable better half, driving the ball on offense while eating the clock on its first drive.
Chase Short, who scored Straughn’s first touchdown with 3:44 left in the second quarter, kicked a 22-yard field goal with 7:05 left in the third quarter cut the lead to 13-10.
T.R. Miller couldn’t get the ball moving at all on its next offensive possession and had to punt the ball away with all the momentum swinging in Straughn’s favor.
Driving on T.R. Miller’s 24-yard line, Short threw an interception to defensive back Kieon Smith with 9:36 left in the fourth.
Straughn held T.R. Miller to a punt on its next offensive series.
Again, Straughn drove the field and ate up some clock. By the time it got to its own 1-yard line, the local Tigers were full.
Short then punched the ball in with 2:37 left and made the PAT to put his team ahead 17-13 over TRM.
“We didn’t do anything fancy,” Taylor said about Short’s TD. “We ran right at them. Chase pulls it and gets in. I think there is a group of young men in there that grew up more than anything that a coach could do to them. They grew up and understand.
“I think we became a better team given a loss,” he said.
Riggs said Straughn had a great plan for his still unbeaten team.
“They were very well-coached,” Riggs said. “They controlled the second half. We couldn’t get the ball.
“I was proud of our bunch after everything had gone wrong in the second half. We bowed up down there at the end and made some plays down there that we needed to.”
Jackson scored Miller’s first touchdown of the night way back in the first quarter with 10:01 left on the clock on a 9-yard dash up the middle. T.R. Miller took a 13-0 lead with 3:19 left in the first after a Straughn turnover as Kameron Coleman rushed two yard for the score.
Straughn’s Steven Twitty set up Short’s first touchdown when he picked the ball up and raced down field to his own 41-yard line off of a T.R. Miller turnover.
“The two turnovers were critical in the game and they did a great job of getting on the ball,” Riggs said. “We turned over the ball twice and you can’t do that against a good team, and you can’t do it in Straughn, Alabama, if you plan on winning over here.”
Straughn visits Opp next week in a key region match up. T.R. Miller will host W.S. Neal in the Battle of Murder Creek.