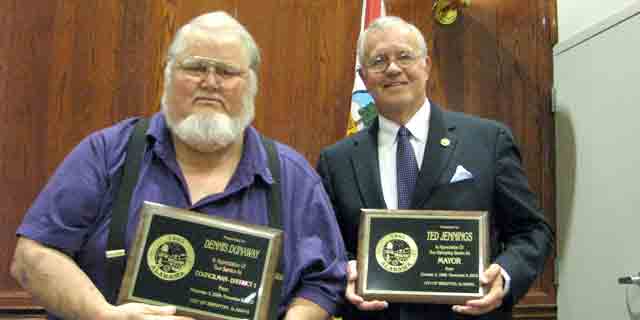 Dennis Dunaway, left, and Ted Jennings are honored for their service in city government.

With a handshake and a wish for luck, two council members and mayor for the city of Brewton participated in their final meeting as an elected official.
Mayor Ted Jennings and councilmen Dennis Dunaway and Cary Barton will be replaced when new officials take the oath of office on Nov. 5.
Jennings said the day was bittersweet with an emotion of excitement and sadness.
“When I announced I would not seek re-election a year and a half ago, I began thanking people then for their support,” Jennings said. “My time as mayor has been very special for me. I have been fortunate to work with this council who has done an excellent job and other good councils as well. We have not been able to do everything we wanted to do, but we have accomplished a lot of things.”
Jennings said the support of his family and the citizens of the community he has served for 24 years has left him humble from the experience.
“When you’re in politics, your family is in there with you,” Jennings said. “They have stood by me and support me and told me what I did wrong and told me how to fix it. I want to thank the citizens of Brewton for allowing me to serve as mayor. I have done my best in all that I have done, because I knew I was representing this council and this city. That gave me the strength to do things I wouldn’t ordinarily do.”
In his closing remarks, Councilman Dennis Dunaway expressed his appreciation for having been able to serve the people — a job he believes he was meant to hold.
“I want to thank the cities of this city and of District 1,” Dunaway said. “I hope I’ll be back again to serve the city. I can’t tell you how much I enjoy being able to help people. I believe serving people is what I’m meant to do. For the last four years, this council has done an excellent job working with the mayor to do what’s best for the citizens of this city.”
Dunaway also left words for the incoming administration encouraging them to keep the city moving forward.
“I leave a challenge for the new council,” Dunaway said. “I challenge you to keep new ideas coming for the city in an effort to continue moving ahead.”
Cary Barton, out-going councilman for District 3, was not present for the final meeting of the current administration, but Jennings offered words of thanks for the job he has performed for the city.
“Nobody cares more for this city than Cary,” Jennings said. “He served from October of 2000 to Nov. 5 of 2012. He had a hard time after his accident, but he fought his way back to serve the citizens of this city because he truly cared for the people.”
Mayor-elect Yank Lovelace along with newly elected councilmen Pat Poole and Bill Littles for District 1 and 3 respectively, will take over the offices in an inauguration ceremony set for Nov. 5 at 9 a.m. in the council chambers at Brewton City Hall. The ceremony is open to the public.

EC University of Alabama Alumni and Friday to have…