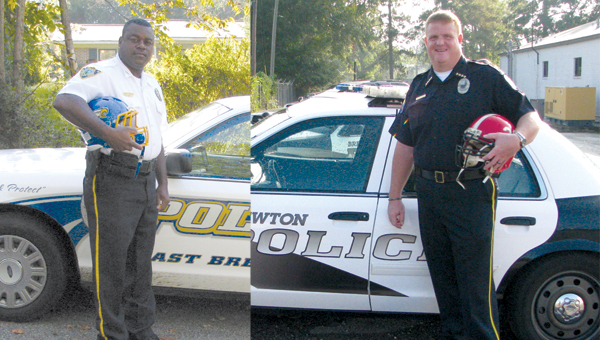 In a small community like Brewton and East Brewton, it’s almost impossible to talk to anyone who doesn’t have special memories surrounding the Battle of Murder Creek.
In a cross-creek rivalry that began in 1946, Brewton and East Brewton football players have fought to the finish on the field — but worked together in the cities they call home.
Brewton Police Chief Monte McGougin and East Brewton Police Chief Kenny Brazile are a pair that battled each other on the field but find themselves on the same side of service for their respective cities.
McGougin played left tackle for the T.R. Miller Tiger football team during his high school years in the late 1980s.
Brazile fought as a linebacker and strong safety to help the W.S. Neal Eagles take home a win during his time on the team in the late 1980s.
Brazile said he remembers the rivalry with fondness and has never found anything like anywhere else.
“I was in the military and did some traveling after I finished school,” Brazile said. “When I was stationed in other places, I’d go with some of my buddies to high school games in the area. Those rivalries I saw those times didn’t even come close to comparing with the Neal/Miller rivalry. There’s just nothing else like it anywhere.”
McGougin also said the rivalry was one that kept many people coming back to the game long after graduation from school.
“I can remember making it a point to come home for that game even after I went to college,” McGougin said. “It was that important to us then and it’s still important today. It’s just what we do.”
Although the rivalry will always be a part of the community and the people here, McGougin said the intensity of the rivalry has cooled over the years — but still burns in the hearts of former players.
“It’s not quite as big a rivalry as it once was,” McGougin said. “Back when I was in school we dressed up that week and really built up to that one game. It was almost like homecoming back then. There was some mischief that went on during that week, too. Back then it was accepted, but today that has changed and people don’t put up with that kind of mischief anymore.”
The mischief McGougin referred to wasn’t just on the Brewton side of Murder Creek. The East Brewton area was also a target for students looking to make a statement about the game.
“There was always something going on,” Brazile said. “There were cars coming to the school and we even heard about things being strung up on the goal posts at the football field. It was all pretty much in fun, but there were a lot of crazy things that went on during that one week of football season.”
With both policemen having begun their football careers at a very early age, Brazile and McGougin remember learning the importance of the rivalry as they grew up in the sport.
“I started playing football in the second grade,” McGougin said. “It was bred into us as kids then on up to high school. It was always a very competitive game and the one game everyone tried to get to each season.”
From as far back as his years in Peewee football, Brazile said the rivalry stayed on the field and out of the streets.
“When I was playing Peewee football, Brewton didn’t have enough boys to have a team one year and they came and played with us in East Brewton,” Brazile said. “It didn’t matter to us that we had Brewton guys on the team. We were all playing football for the same team then. We became friends during that time and stayed that way through the years. When we faced each other in that one game, we were opponents. But when the game was over, we all went back to being friends.”
As the lead law enforcement officer in their respective cities, McGougin and Brazile said their past experiences are keeping them on their toes in the present.
“We will be adding a little more patrols during the week leading up to the game,” Brazile said. “I’ve been there and I’ve seen some of the things kids do during that week. I still have memories of eggs and some vandalism that went on way back then — so I know what to watch for this week. I just hope that people keep their mind on the fact that it’s other people’s property and respect that. Let the players settle this rivalry on the field.”
McGougin, too, said he planned to keep a watchful eye on the city through the week.
“As police chief, we don’t have to deal with the kids too much anymore during game week,” McGougin said. “The mindset of parents has changed over the years and the things we saw in the past just wouldn’t be tolerated anymore. With everything progressing and changing over the years, I don’t expect any problems. But, we will be watching.”
In its 66th year, the Battle of Murder Creek will be held at the Brewton Municipal Stadium hosted by the T.R. Miller Tigers. Kick off is at 7 p.m. Gates open at 5:30 p.m.