City gets ‘delite’ from donut shop 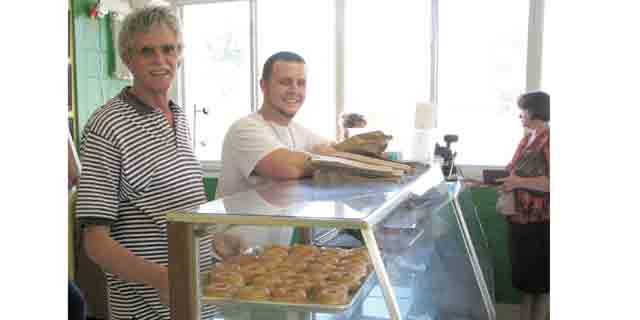 Comfort food has just become more plentiful in the community — thanks to the handiwork of a group of donut makers.
Donut Delite, a shop open for just a week, is experiencing a big beginning for the business.
Barry Carraway, manager of the shop, said the response has been tremendous with plenty of donuts finding their way into the city.
“We are extremely grateful for the response from everybody in this town,” Carraway said. “The people here have been so helpful in every way possible to help us get going. We are happy to be here.”
Carraway said he and owner Robin Bare, had considered opening a shop elsewhere, but eventually made the decision to come to Brewton. Carraway is a resident of Berrydale, Fla., and Bare lives in Milton, Fla. Bare’s son and daughter-in-law, Ian and Brandi Bare and grandhcildren Cameron and Hunter have also been instrumental in preparing the location for opening, he said.
“We had been wanting to open a donut shop for a while and did some research on a location,” Carraway said. “When we started looking around in Florida we discovered it would take about a million dollars to get a business started there after you took care of all the rules, fees, regulations and everything involved. At that point, I told Robin ‘I’m going north’ and that’s what I did.”
Carraway said he got in contact with Steve Yuhasz, community development director for the city of Brewton, and the hunt began for a location.
“Steve started helping me with a search for a building and put me in touch with the owner of this place,” Carraway said. “Darryl Simmons, the owner, has bent over backwards to help us get going. We are grateful for everyone’s help in getting off to a good start.”
After opening last Saturday, Carraway said business has been beyond what he expected.
“I knew after talking to some people before opening, that donuts were going to be a good thing for the community,” Carraway said. “But, I had no idea things would go as well as they have.”
With hopes of supporting a community that has been so receptive to the business, Carraway said he wants to keep local people working.
“We have hired Belinda Miller and Cheryl Crawford to help out front,” Carraway said. “We have Derek Ramos working as our head baker as well. We want to do our part to put local people to work and support this community.”
Having sold out on more than one day of business, Carraway said they are looking to improve and add to the items offered at the shop.
“It takes a little time to make donuts that are light,” Carraway said. “You can’t rush yeast. We make the dough and have to let it rest before we cut out the donuts. Then they have to proof again for 20 minutes before they can be cooked. You’re looking at about an hour for each batch of donuts from start to finish. We are limited with space, so it takes some time to replenish our donuts.”
Customers will have other options than the traditional yeast-style donut.
“We have just gotten in our equipment and supplies to start making cake-style donuts,” Carraway said. “We have great recipes we’ll be using and will have more choices for our customers in the next week. By having cake donuts along with the yeast donuts, we can have more available for the customers.”
Cake donuts have a little more versatility, Carraway said, making them better for traditional and unique flavors.
“A couple of the cake donut varieties we want to start with are very good choices for those with a sweet tooth,” Carraway said. “We will have blueberry donuts that will be great for Brewton and we are working on a red velvet donut with cream cheese frosting that we think will be a big hit.”
Currently the menu at Donut Delight consists of glazed donuts in traditional and chocolate; lemon, raspberry and Bavarian cream filled donuts; cinnamon buns, apple fritters, and of course, donut holes.
“We thank God for this opportunity,” Carraway said. “I know the economy has been rough and we’ve all been through hard times. We appreciate the response because we know where people are coming from in these economic conditions. We hope to offer that little taste of comfort for the people of the Brewton area.”
Donut Delite is open from 5 a.m. to 1 p.m. seven days a week and is located at 301 St. Joseph Ave. in the old Sonic location with drive through service available.