Green to perform at BCA event

Middle Eastern Oud or Kemenche music, South American Charango and Zamponia or East Indian Tablas or Santoor is not your typical concert for the Brewton community.
But, a presentation by Todd Green hosted in concert by the Brewton Council of the Arts, will give area residents a chance to experience the unique musical talent Thursday night. 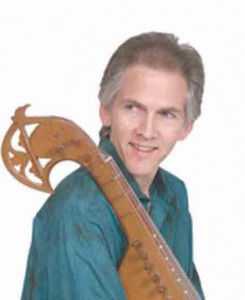 With the concert set to begin at 7 p.m. at the Woodfin-Patterson Auditorium on the campus of Jefferson Davis Community College, audience members are sure to enjoy a unique experience.
Madelyn Cave, media chairperson with BAC, said Green’s performances have left audiences mesmerized all across the country.
“Green has astonished audiences across the country with his diversity on a multitude of string, flute and percussion instruments from all over the world,” Cave said. “His performance will be enhanced by digital samplers, which allow him to record and over-dub instruments  one by one, making him a one-man-orchestra of unique and exotic instruments. As fascinating  to watch as to listen to. Todd intersperses his playing with entertaining explanations of the music and the instruments.”
Clay Lisenby, president of BAC, said the performance will be one the entire family can enjoy.
“One of our goals in the Brewton Council of the Arts is to plan performances that will appeal to a wide range of ages,” Lisenby said. “We were impressed with Todd Green because he plans to visit with the children for a special time of entertainment.”
Green will be at Brewton Elementary School, W.S. Neal Elementary School, Flomaton Elementary School and Pollard-McCall School. No times are available at this time.
“Someone like Green who is willing to spend special time with the youth is a great asset,” Lisenby said. “We like programs that will appeal and support the youngsters as well as the other programs.”
Green will mix familiar instruments with some the audience may not recognize, such as those that come from South America, Middle East, Asia, India, China and other less known places.
Todd Green has been writing and performing his own music professionally since the age of 15. He studied composition, arrangement and performance at Berklee College of Music  and has performed with some of the best teachers. Most of his life he spent on the East Coast and in 1988, he decided to leave New York and he made his home in Montana for a while and now lives in the Lake Tahoe area.
Green’s performance is part of the Brewton Council of the Arts Performance Series for season ticket holders. Tickets are $15 at the door, but students may purchase tickets for $3 in advance at area schools.
For more information about the Arts Council or to become a patron of the arts, contact Clay Lisenby, at 867-9962 or any member of the Brewton Arts Council.