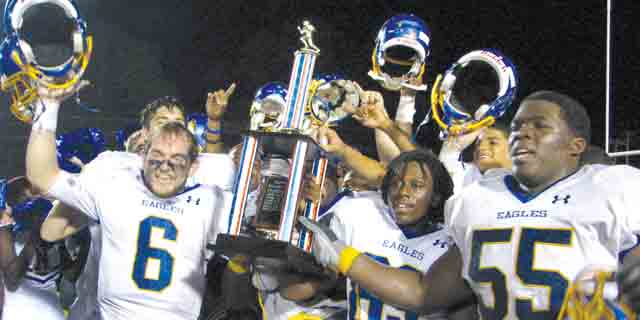 The tension was thick at Brewton Municipal Stadium Friday night as a battle for bragging rights took place on the field.
With see-saw scoring most of the night, the final score was a good reflection of how hard-fought the battle was between the two teams.
A crowd estimated at well over 1,000 were on their feet most of the night with standing-room only available for fans on either side of the field.
At the final buzzer, W.S. Neal’s Blue Eagles would be victorious in the battle for the first time since 2007 — on Oct. 26. That 2007 win came when the Eagles took the game into overtime on the East Brewton field. The final score was 14 to 8.
The Tigers then answered that loss to W.S. Neal with four wins in a row in what has become one of the most popular and well-attended rivalries in the state.
For complete coverage of Friday’s game see the sports on page 10-12 of today’s edition of The Brewton Standard.
More photos from the game —including a look at the fans — will be published in Wednesday’s edition.