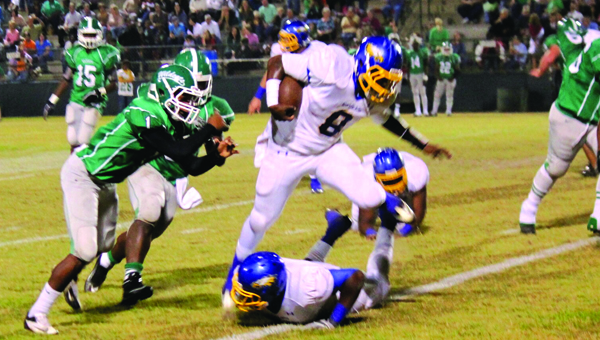 Marquese Banks leaps over a teammate to elude some Millry Wildcats

Despite the long distance from home, Neal fans packed the stands in Millry Friday night to watch the Eagles close out their regular season with a 66-20 win against the Wildcats.
The win was possible because the Eagles stayed focused and were encouraged by faculty this week, head coach Doug Hoehn said.
“The kids played really well,” he said. “We had a good week at practice. I’m happy about their focus having come off the big win against Miller. You know, last time we had a big win against Bayside, we didn’t show up against Opp. One of the things I think helped our kids a lot is our faculty. We’ve got great faculty, and our school spirit has increased so much. They’re involved in the kids’ lives in extracurricular activities as well as encouraging them in the classroom, and I just noticed as I walked around school this week, how great our faculty is with the kids, building them up and giving them confidence. I think that had a lot to do with it, I really do.”
The Eagles started off strong, when they kicked off to the Wildcats and promptly recovered the kick, needing only four plays and less than two minutes to score on a 1-yard run by senior, Marquese Banks, jumping to a 6-0 lead.
The Eagles scored again on their second possession before allowing a 48-yard Millry touchdown run. Neal answered quickly with a 36-yard touchdown by freshman Quinton Samuels, putting the Eagles ahead 22-7 after senior Dylan Godwin completed a pass to freshman Malcolm Hawthorne for the two-point conversion.
Neal’s defense held Millry for the rest of the first half while the offense racked up four more touchdowns to head into the locker room with a 52-7 lead. One of the Eagle touchdowns came after senior Cam Blackman recovered a Wildcat fumble, leading to a seven-play drive that ended with a 20-yard touchdown run by Godwin. On the first play after the kickoff, Neal recovered a second Millry fumble, driving 28-yards for yet another touchdown. The Wildcats fumbled a total of three times in the second quarter, with Neal recovering all three.
Neal received the ball to start the second half, and on the first play, Banks ran for a 70-yard touchdown, and senior Christian Purvis added the two-point conversion to put the Eagles up 60-7 just 34 seconds into the third quarter.
On their first possession of the second half, the Wildcats answered with a five-play drive that led to a 34-yard touchdown run, making the score 60-14 with 8:46 left in the third quarter. Neal had to punt for the first and only time in the third quarter, and Millry was able to drive 84-yards down the field for their final touchdown of the night.
In the fourth quarter, the Eagle defense held the Wildcats scoreless, while putting one more touchdown on the board, an eight-yard run by senior Josiah Nettles, with 6:52 left in the game. Number 22, Hawthorne, ended the game on a high note by intercepting a Millry pass with seconds left on the clock. When time ran out, the Eagles walked off the field with a 66-20 victory.
Next Friday, second seed W.S. Neal hosts third seed Slocomb in the first round of the state playoffs. Kickoff is set for seven p.m.
“From here on out, we’re going to have to play our best football to have a chance to win,” Hoehn said. “Hopefully we can have a big crowd at home next week and our kids will have a good week of practice.”