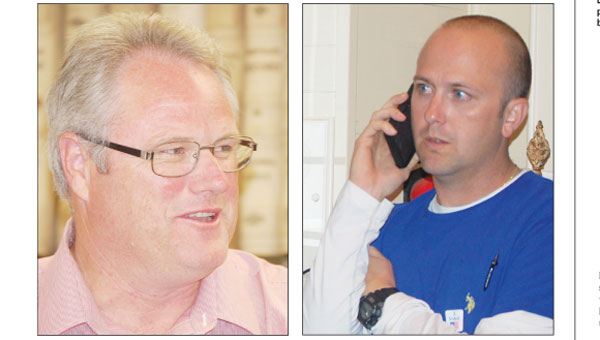 Two offices in the Escambia County Courthouse will see new faces in January when those elected Tuesday night will take office.
Doug Agerton defeated incumbent Emilie Mims for the probate judge position in the county when he claimed 50.79 percent of the vote. Agerton had 7,397 votes cast in his favor while Mims collected 7,157 votes giving her a 49.15 percent total of the votes in the race.
“I’ve worn out some shoes in this campaign,” Agerton said after winning the race. “It has been a long road, but it’s going to be worth it.”
Agerton said the win Tuesday was one he had dreamed of since he was a young boy who tagged along with his mother, Rachel Agerton, who held the probate judge position for many years.
“This is something I have been looking forward to for a long time,” Agerton said. “I can remember when I was 7 years old, I would be in the probate office with my mother and for all those years after. She sat in that chair, and now I’m going to be sitting in it.”
Agerton expressed gratitude to those who helped him during the long campaign season.
“I am proud of my family and they way they’ve helped through this campaign,” Agerton said. “Without them and some other wonderful people, I could never have done this. We’ve run a positive race and only talked about what we could do for the people in this county.”
In the race for circuit clerk, John Robert Fountain handily defeated challenger Becki Breckenridge by taking 58.74 percent of the votes cast in the county for the race. Breckinridge finished the race with 5,954 votes to take 41.15 percent of the vote. Fountain claimed 8,498 votes in the race.
“I can’t say enough to thank my family and my supporters,” Fountain said of the win. “People across the county have helped me get here.”
In the race for Escambia County Board of Education District 3 representative, incumbent Jack D. Crutchfield was defeated by Mike Edwards, who took 55 percent of the vote with 940 ballots cast in his favor. Crutchfield had 768 votes.
In other county races:
• Incumbent Charles “Chuck” Brooks was defeated for the position of District 7 representative with the Escambia County Board of Education. Coleman M. Wallace Sr. took the race with 53.14 percent of the votes with Brooks finishing with 46.74 percent of the vote.
•Incumbent Brandon Smith will return to the District 4 seat on the Escambia County Commission after defeated James Junior Hall. Smith took the race with 68.74 percent of the vote while Hall received 31.19 percent of the vote.
Election totals with a box-by-box count will be published in the weekend edition of The Brewton Standard.