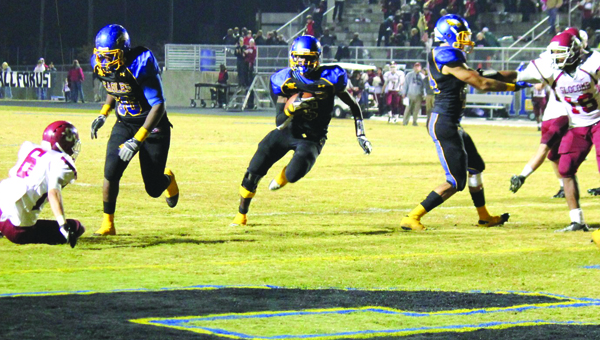 The W.S. Neal Eagles may have been back in their black uniforms for the second time this year, but they are heading to the second round of the AHSAA class 3A state playoffs for the first time since 2006.
Playing in their first playoff game since the 2007 and their first home game in round one since 1996, the Eagles cruised their way to a 66-24 win over the Slocomb Red Tops Friday night in East Brewton.
The No. 9-ranked and No. 2-seed Eagles of W.S. Neal, who improved to 9-2 overall this year, improved to 9-11 overall in first round games in their 20th playoff appearance.
W.S. Neal used their physical running attack to propel them to the 42-point win. The Eagles totaled 532 yards of offense on the night in the win with 530 coming on the ground. W.S. Neal had 284 yards rushing in the first half and two passing yards while amassing 246 total yards in the second half with all coming on the ground.
The Eagles had three rushers total over 100 yards as Marquese Banks led with 162 yards on 19 carries and two touchdowns, Josiah Nettles had 157 yards on nine carries and three touchdowns and Quinton Samuels had 143 yards on three carries and two touchdowns. Samuels added an 82-yard kickoff return for the Eagles final score of the night. Dylan Godwin chipped in one touchdown and had 63 yards on 10 carries.
Of the nine total touchdowns for the Eagles, five came with runs over 50 yards.
“I thought the kids gave a great effort,” W.S. Neal head coach Doug Hoehn said. “I think Slocomb and coach Bennefield and his staff did a great job. They gave us fits the first half. It was anyone’s football game and it just kept going back-and-forth. They did some things that we had not seen them do. I am proud of our kids adjusting to it though.”
W.S. Neal led Slocomb 14-6 after one quarter and 28-12 at the half. In the third quarter, W.S. Neal outscored the Red Tops 24-6 to take a 52-18 lead before holding a 14-6 advantage in the fourth to seal the win.
Slocomb had seven punts in the loss while W.S. Neal had only one.
“I think we played physical tonight,” Hoehn said. “We didn’t have that many penalties but the penalties we did have, I was not pleased with. We are not going to keep going very far if we keep having those penalties. Ball security was good as we only had one fumble. We want to try and limit that down to none.”
After a 10-2 season the last time the Eagles went to the second round and a 6-5 season the last time the Eagles went to the playoffs, W.S. Neal had only won five games in four seasons. This year, they have won eight games and are back in round two for the first time since 2006.
“More importantly these kids have brought respect back to this football program,” Hoehn said. “A lot of pride is back in the school and a lot of pride is back in the community. This win tonight was these kids. As the head coach and I am sure all my assistant coaches feel the same way…we are just privileged to be a part of it.”
W.S. Neal will now travel to 9-2 Fayette County next Friday night. Fayette County defeated B.B. Comer 35-16 Friday night at home in round one.
Game time is set for 7 p.m.