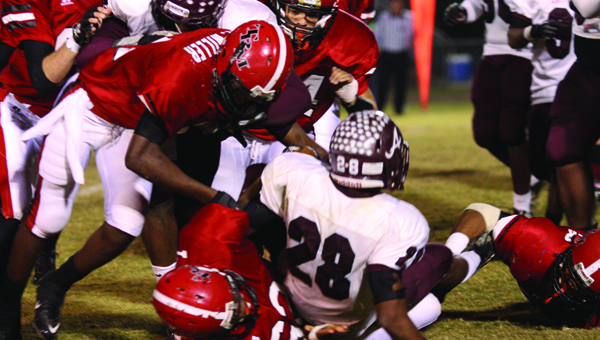 When one looks at the statistics from T.R. Miller’s 55-20 first-round playoff win against Abbeville Friday night, the obvious numbers will impress.
The Tigers (10-1) were dominant in the ground game with 344 rushing yards, and efficient through the air (6-of-9 passing) with 74 more yards. They scored touchdowns in their first six possessions to lead 48-0 by the end of the first half and only punted twice in the second half.
While any fan of statistics would be satisfied with those numbers, they could not fully appreciate the result of the outcome without understanding the process that made it happen.
Sure, you see that Jamie Riggs’ squad scored on six straight possessions to start the game. Before they could do that, though, look deeper. Of those six touchdown drives, four came on runs of 6, 12, 6 and 1 yard. Those are the results; but the process was winning the line of scrimmage close to the end zone.
Opening the second quarter, Abbeville faced third down with the ball at the TRM 3-yard line. A two-yard gain took it to the one. On fourth down, the defensive line created a heap of humanity and the ball carrier was tagged with a two-yard loss. Again, results sell tickets, but the process of the defensive line controlling the trenches made it happen.
“That right there is what we focused on this week,” said Riggs, whose program won its 30th first-round playoff game. “There were two major focuses for us this week at practice – controlling goal-line plays and then working on protection, coverage and returns in the punting game. We didn’t have to do so much tonight in the punting game, but I was proud of the way we handled goal-line or scoring plays.”
The process and the results allow the Tigers to move on to familiar territory – the second round of the AHSAA Class 3A playoffs, where they will have a long road to travel to take on host Midfield next Friday night. Midfield defeated Gordo, 35-14.
After three nail-biting games down the stretch to end the regular season – T.R. Miller edged both Straughn and Sweet Water in Weeks 8 and 10, and lost a heart-breaker to W.S. Neal in between – Riggs’ squad knew getting a fast start would be key as Abbeville took the field at Brewton Municipal Stadium. It needed to win big. Twenty-one first quarter points, and 27 more in the second frame provided the big lead they needed.
“We really got a great start tonight,” Riggs concurred. “We played with a lot of energy and even though we fell asleep a little in the second half and allowed them to score on a couple of big plays, we finally took control again and was able to advance.”
The Tiger offense was firing on all cylinders from the outset and, as usual, Dominique Jackson led the way early. But he certainly wasn’t the only offensive star for the night. Jackson led all rushers with 123 yards on 18 carries and scored touchdowns on runs of 12, 4 and 1 yard before intermission.
In the meantime, Kieon Smith added two touchdowns (6, 40) in that same time frame on his only two carries, while Kameron Coleman contributed a pair of touchdowns as well (6, 45) and added 79 yards on five carries. Freshman sensation Tamerick Jenkins added a 14-yard TD run and carried the load in the second half. He finished with 84 yards on 11 carries.
The Tigers took the opening kickoff and needed just eight plays to cover the 58 yards before scoring their first touchdown on Coleman’s six yard blast. Trey Salter booted the first of his six PATs on the night to make it 7-0.
Abbeville went three-and-out and their first punt was followed by a five-play scoring drive culminated by Jackson’s 12-yard run. Three plays into Abbeville’s next drive, Cody Smith picked off the first of T.R. Miller’s four interceptions (Brett Smith, Kieon Smith and Kardarius Jones had the others). Two plays later is was 21-0 as Smith scored from six yards away.
Abbeville flirted with a touchdown as that 12-play drive that moved into the second quarter was finally thwarted with the fourth-down stop at the TRM 3-yard-line. From there, the Tigers traveled the 97-yard distance in just nine plays and scored on Jackson’s 4-yard plunge to put the game out of reach at 28-0. A 27-yard pass from Kevin Davis to Chandler Brown and a 28-yard run by Jackson were key plays in the drive.
Though giving up three TD passes in the second half, the Tigers got the easy win and will be able to extend the season to round two next week.
“As is always the case once the playoffs start, when you’re still playing next week is the most important game of the season,” said Riggs. “You have to be ready to play every week because there are a lot of tough teams along the way.
“We have to be the best we can be every week from here on out. That, too, is part of the process.”
T.R. Miller will travel to Midfield next Friday night for their round two game. Game time is set for 7 p.m.