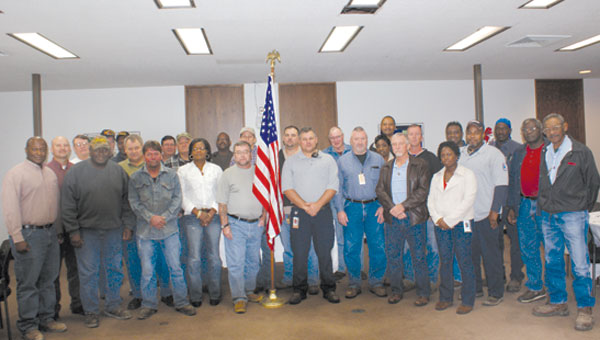 Veterans were honored during a special breakfast gathering Friday at the Brewton mill of Georgia Pacific.

More than two dozen veterans were honored with a special breakfast and presentation Friday morning in honor of Veterans Day — veterans who just happen to be employees of the Brewton mill of Georgia Pacific.
A program held in their honor was hosted by staff and leaders of Georgia Pacific at the Woodlands facility of the company.
Georgia Pacific’s Brewton mill general manager Jeff Joyce began the program by leading the group in the Pledge of Allegiance. Also speaking at the event was Major Anthony Lamar, who spoke from the veteran’s point of view. Lamar was a member of the United States Air Force from 1996 to 2007.
Each of those in attendance were treated to a full breakfast meal as well as a special gift commemorating their special day and their service to their country.
Those honored are currently serving or have previously served in U.S. Armed Forces.