Smith, Wiggins sworn in as commissioners 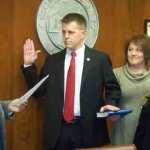 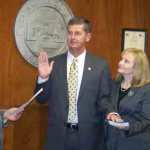 A Wednesday ceremony in the commission chambers of the Escambia County courthouse officially installed Commissioners Raymond Wiggins and Brandon Smith for another term in the position.

Smith was re-elected to the seat representing District 4 in November general election defeating James Junior Hall in an run for the seat.

Smith was joined by his wife and daughter as he took the oath of office administered by Judge David Jordan.

Raymond Wiggins, who was unopposed in his run for the commission seat representing District 2, was also sworn in by Jordan as he wife stood by him in the ceremony.

Commissioners hold an office for four years with staggered terms in each of the District seats.