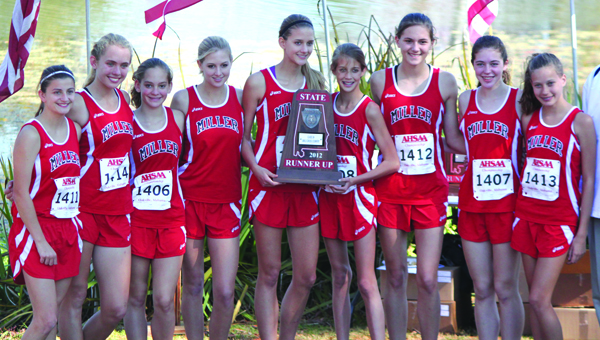 For the fourth time in five years, the T.R. Miller Lady Tiger cross country team came away with the class 3A state runner-up trophy Saturday at the Oakville Indian Mounds Park.
After finishing second to Bayside Academy by one point a few weeks ago at sectionals in Montgomery, the Lady Tigers fell by five points to the Lady Admirals Saturday.
Bayside Academy defeated T.R. Miller 66-71, despite Lady Tiger Karisa Nelson winning her fourth individual 3A title with a time of 18:47.42. Nelson has finished first from 2009-2012 and took second in the 2008 race as a seventh grader.
American Christian Academy was third with 89 points.
For the T.R. Miller girls Saturday, Nelson took first with a time of 18:47.42 and Allie Nelson took sixth with a time of 20:16.12. Katie Nelson came in ninth with a time of 20:38.07 and Lindsay Norton—the lone senior on the team—came in 26th with a time of 22:01.46.
Amber Terry placed 36th with a time of 22:33.50 and Payton Baxter finished with a time of 23:49.74 for 62nd place. Morgan Rowell’s time of 24:16.27 gave her a 71st place finish out of the 124 runners in the meet and Shelby Evans had a time of 24:46.87 for 78th. Auburn Schoonover rounded out the Lady Tigers with a time of 25:06.20 for 83rd place.
“Our effort was outstanding, however I had hoped we would win the state championship this year,” T.R. Miller cross country head coach Rob Atkinson said. “The kids did a great job this year preparing for each meet, which put us in great standings for the state meet. Our No. 5 runner, Lindsay Norton, ran a great race as well as Katie Nelson. We had a couple of other runners with great times, but the times were not as fast because the course got hotter as the temperatures starting to rise. We did not finish where I had hoped, but overall, I was pleased with our effort.”
Atkinson praised Karisa Nelson on her work ethic as she continuously works hard and always does what is asked of her.
“She is a competitor, and does everything I always ask her to do and that is why she has now won four straight individual titles.” Atkinson said. “I would have really liked to see her break her personal record and run her time in 17 minutes on Saturday. She will be running in the Foot Locker race in a few weeks. I would like to see her achieve her goal and run that in the 17-minute range. She always gives her best effort, and it definitely shows with four straight individual state championship wins.”
The Lady Tigers scored 103 points to place third behind state champion Montgomery Academy’s 36 points and runner-up Rogers’ 49 points last year, ending a three-year run at winning the runner-up trophy.
The Lady Tigers fell 18 points short to Rogers 60-42 in 2010.
The year before, in 2009, the Lady Tigers lost by two points to Montgomery Academy and in 2008, came up seven points short also to Montgomery Academy.
“I am disappointed that we settled for runner-up instead of bringing home the state championship trophy for the fourth year, but all I can say is we will continue to work hard and improve for next season,” Atkinson said. “We have done everything we could do to prepare for and win this state championship, but we will have to be willing to work harder than the other guys if we want to contend again next year. I believe our girls and boys are willing to do just that.”
While the boys did not compete as a team, they still sent three runners to the state meet.
Senior Rob Stokes finished third overall with a time of 17:03.32 and junior Christian Carlson took 19th with a time of 18:19.13. Sophomore Carter Frezell rounded out the Tiger runners, as he placed 53rd out of 124 runners with a time of 19:30.38.
Montgomery Catholic came away with the boy’s title.
“We had three boys go up and compete this year,” Atkinson said. “Rob finished third overall in the race, but his time was not as fast as it usually is. The temperature makes a big difference, and when it starts to warm up quickly, it affects how people run and their times. He was 17:03, which is almost a minute off his usual time. Christian was 18:19 and again, an increase in time. The whole course was slow, and extremely difficult, but overall our kids did what they were supposed to do. You just have to deal with issues like that, and keep in mind what you went there and execute.”
While the 2012 season has only been over for a couple of days now, Atkinson said he is ready for next year—a season that will see most runners from this past year coming back.
“The attitude and effort given by our team this year was by far the best we have ever had,” he said. “Our preparation has been outstanding all year long and we have a lot of help from several different people in our community. Scott Huff and Alan Ash donate so much of their time to help, and we really appreciate them. Our younger runners have done better than they ever have, and I am always impressed with them. There is still a bright future for us. All of our girls are coming back next year as we only lose Lindsey Norton for the girls and Rob Stokes, John West, and Ryan Snowden for the boys. They have made big contributions to our teams over the years, and will be tremendously missed.
We do however have a lot of potential for our future team, and I’m ready for the next season.”