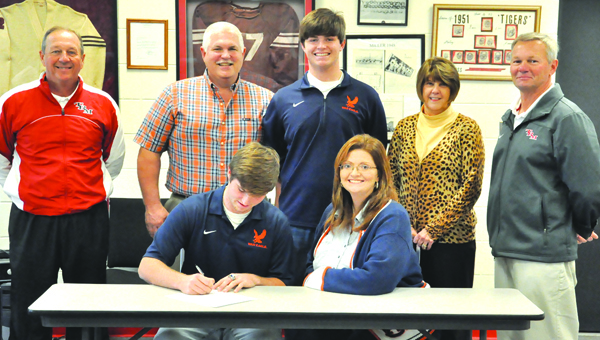 While the year of 2012 has already been one for the ages for T.R. Miller senior Kevin Davis, Wednesday night and Thursday morning of this week just added to it.
After already winning a national championship with the East Cobb Braves summer travel ball team this summer, earning 3A pitcher and player of the year, going to San Diego for the Perfect Game All-American East-West game, committing to Auburn, making the USA National team and winning a gold medal in Korea, Davis signed his National Letter of Intent to play with the Auburn University Tiger baseball team. In the end, Davis said it came down to Auburn, LSU, Florida, Florida State and South Carolina and he went with the Tigers.
Davis had a family and friends signing party Wednesday night at The Oaks and signed his letter Thursday morning at the school’s field house.
“It is just all about the people you are going to be around,” Davis said of his reasoning to commit and sign with Auburn. “I mean it is great to play in the SEC and everything and that is all I ever wanted to do was to play in the SEC, but I felt like the people, the players, the coaches, the faculty and everybody at Auburn have been so helpful with everything I have need throughout this whole process. They have been there since the beginning of my freshman year.”
While Thursday’s signing was a little calmer setting than Wednesday’s signing, Davis said Wednesday’s signing was a great deal.
“The Oaks was able to help us out a lot and have a good get-together and have all my friends and family there when I signed,” he said. “It was just a nice little deal.”
T.R. Miller Tiger head baseball coach Jim Hart was on hand for both signings.
“He is a special kid and we know he is special,” Hart said of Davis. “We are just extremely proud of him and what he has accomplished so far. As far as what we think about this year, it will just be a takeoff of what he has already done. He has gotten better every year from his freshman year right on up. I think this summer with all the experience he had and the travel, I don’t think that did anything but make him that much better. When you are pitching overseas and then you come back and you are pitching in Alabama and high school, I think he will continue to do his deal.”
Hart said while most people look at Davis as a power pitcher, he has more to offer.
“I mean he has a great fastball, but his curveball and his changeup are really good and I think that makes a difference in how he handles things,” he said. “We are really excited about it and looking forward to it and we are just tickled to death for him.”
As part of USA Baseball’s 18-under team this summer, Davis pitched against Korea and Australia and then delivered a win against Japan that secured the U.S.’s spot in the championship game. The 6-2 victory against Canada marked the first 18-under world title for the United States since 1999.
While being named as 3A player and pitcher of the year for the 2012 season by the Alabama Sports Writers Association, last year Davis was named pitcher of the year for class 3A. He was also named to the super all-state team in 2012.
During his junior season for the Tigers, Davis—a 6-1, 190 pound right-handed fireballer— played in 27 games and had 27 hits in 74 at bats and scored 26 runs. He had 16 RBIs with six doubles and two homeruns and six stolen bases. He walked 17 times and had an average of .365.
But his stats on the pitchers mound are the most eye-catching as he pitched in 10 games and had a 7-2 record with one save. He pitched 60 innings and allowed 21 hits, 10 runs, six earned runs, walked 13, struck out 139 and pitched three shutouts and one no hitter and had an ERA of .70.
Davis helped lead the Tigers to a 18-9 season this year before falling to Opp in the first round of the state playoffs.
While his best sport may be on the baseball diamond, Davis is the starting quarterback for the Tiger football team. After missing two regular season games and a preseason game this year, he has guided the Tigers to a 10-1 record, a region championship and is currently in the second round of the state playoffs.
“It was good to go ahead and get that out of the way before baseball season,” Davis said. “I kind of wanted to do it after football season and before baseball season so I wouldn’t have to be focused on both of them. But right now I am just trying to stay focused on Friday night (against Midfield) and see what happens. We want to be able to go as far as we can take it.”
Davis and Tigers will be on the road Friday night at Midfield. Game time is set for 7 p.m.