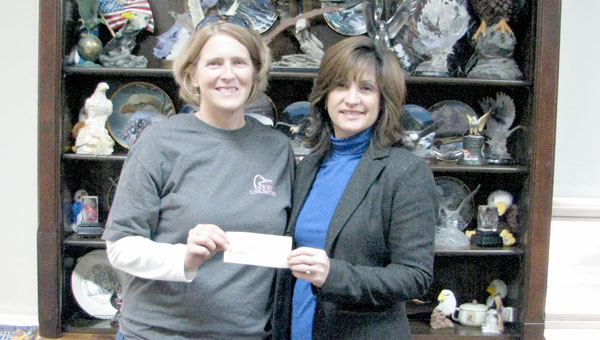 Sherry Davenport, left, owner of Bonehead Boots, presents a check to W.S. Neal High School Principal Patty Frazier after W.S. Neal was declared the winner in a contest by the retailer. W.S. Neal Middle and Elementary schools also received checks as part of the contest prize.

For the third year, Bonehead Boots has given their fans and customers a chance to help area schools.
In a special Facebook contest, fans and customers earned points for their favorite school by casting a vote or by making purchases at the local retailer.
Sherry Davenport, owner at Bonehead Boots, said it was started as a way to help give back to the community.
“This has been really good for us and for the schools every year that we’ve done this,” Davenport said. “This is the first year that W.S. Neal has won and we’re happy to make a donation to the school based on the votes from our fans and customers.”
W.S. Neal received the most points in the contest that spanned just over a week on the social media page.
“Since W.S. Neal has three schools, each of the schools received $100 each,” Davenport said. “We split the $300 commitment money between the schools to use as they see fit.”
Davenport said the contest held by Bonehead Boots was similar to ones seen by other businesses.
“We want to get the people of the community excited and involved in helping our schools,” Davenport said. “It also helped us since it stirred some interest in our fan page where we let people know about new items we get in or other special sales we have going on. This gave them that opportunity and of course, competition is always fun.”
Davenport said the fan page on Facebook for Bonehead Boots has reached the limit on allowed fans, but the information is still available to those looking to see what the retailer has to offer.
“We created a business page on Facebook, too,” Davenport said. “When we reached our fan limit on our original page, we still wanted people to be able to find us and see what we have to offer when new shipments come in or when we have something special going on as far as sales and other events.”
To find Bonehead Boots, visit Facebook and look for their business page.