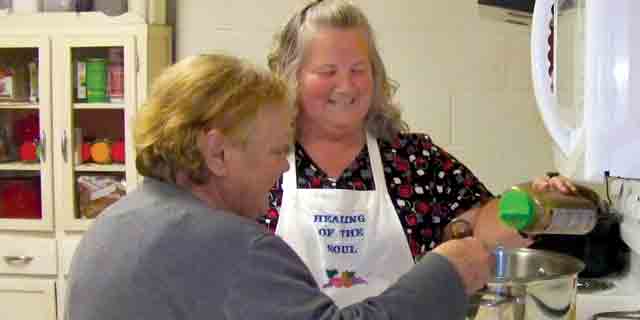 Byrd, with her mother Betty Sellers, prepares to feed up to 600 people Thanksgiving dinner through her ministry — Healing of the Souls Outreach.

When Janet Byrd felt a tug at her heart about feeding the hungry, she had no idea that tug would pull her for six years.

Byrd said she first felt the desire to help feed the hungry several years ago and it took a while for God to put the means to meet those needs in her path.

“My husband and I had wanted to go to Pensacola to the shelters there and help feed those who were hungry,” Byrd said. “But, the opportunity never came along to go when they needed help. After a while, we began to realize there are so many people right her that need that kind of help.”

After praying about the desire, Byrd said the opportunity presented itself and what is now Healing of the Souls Outreach was born.

“We just really wanted to continue to minister to those in need and who may be hurting financially and spiritually,” Byrd said. “We are in our sixth year of doing a Thanksgiving dinner for the people in this area.”

For only the second time since beginning the Thanksgiving tradition, Byrd said the offering is expanding to areas outside of Brewton and East Brewton.

“The first few times we did this it was just in East Brewton,” Byrd said. “It grew a little and we started serving the meal at the East Brewton Civic Center for anybody in Brewton or East Brewton. Then, a couple of years ago, we decided to branch out and take food to those in the Century area. We stayed right here in East Brewton last year, but we are going to do what we can in Flomaton this year in addition to our regular people here.”

Byrd said the continued growth in the number of volunteers gave her the idea to expand the holiday tradition.

“We had so many people come to us and want to help last year,” Byrd said. “We were actually kind of bumping into each other while we were working to prepare plates for people. That’s what got us thinking that with this many people we might want to see if we could spread out and be a blessing to more people in need.”

Byrd said a traditional holiday meal — with turkey and all the trimmings — is being prepared for as many as 600 people.

“We have been so blessed to have some churches in the area step up to offer their help in preparing food for that many people,” Byrd said. “Each church is preparing certain dishes and we will all come together and divide the food between our East Brewton and Flomaton locations and be ready to feed people beginning at 11 a.m. Thanksgiving morning.”

Byrd said the East Brewton Civic Center will once again be home base for the group, with the Flomaton Pentecostal Holiness Church on Main Street in Flomaton as an outreach location for the holiday meal.

Byrd said the only concern she has about serving in two locations is that some of her ministry partners and volunteers will be working away from her on Thursday.

“We have spent all this time together and this year some of us are going to be separated from each other that day since we’ll be serving in the two locations,” Byrd said. “But, it’s just part of what we’re called to do. When you work for the Lord, you’ve got to go wherever He sends you.”

Byrd said that although the preparation, work and long hours makes for a tiring holiday, she is confident she will continue to provide this help “as long as God tells me to.”

“I just love doing this and can’t imagine ever stopping,” Byrd said. “We are just so blessed and I wanted to be able to bless someone else. I know that there will be someone who will take advantage of this ministry, but if it’s just for that one person who needs a touch, it’s worth all the backaches and misery. I don’t do this just for the people, I do this for the Lord.”