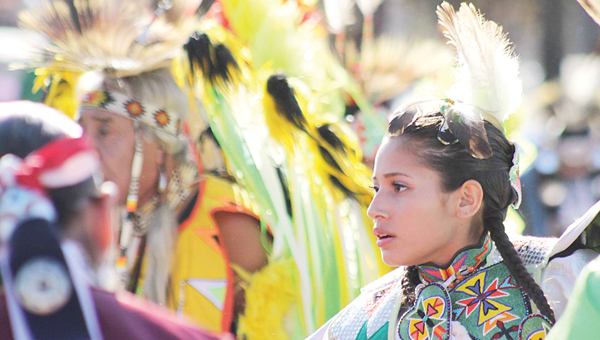 The 42nd annual Pow Wow drew a big crowd to Poarch Thursday and Friday, and the masses were made up of a mixture of people including veterans of the event, as well as many first time visitors who said they were just curious about the heritage festival.

Pow Wow visitors, both new and old, certainly did not find any shortage of entertainment, food or merchandise at this year’s event. Following the opening ceremony Thursday morning, led by Tribal Council Chairman Buford Rolin, the crowd dispersed to sample the many food vendors, including the Pow Wow’s famous roasted corn, an area full of rides and children’s games, several historical reenactments and a plethora of vendors selling everything from traditional Native American clothing to hand woven baskets.

David Gehman, secretary for the tribe, said he felt like this year’s event was one of the best to date.

“I haven’t heard any numbers yet, but it was a big crowd,” Gehman said. “The weather was beautiful this year. At one point it was actually almost hot.”

Gehman said he expected big numbers throughout both days of the festival.

“It was a big day and I expect another big one,” he said. “We had people out enjoying it and eating the roasted corn. They just did a bang up job this year.”

The roasted corn was not the only thing drawing the attention of this year’s Pow Wow crowd. Events including the annual Princess Contest and Warriors Tournament dance contest both drew a large number of curious on lookers.

At 1 p.m. the two-day festival’s biggest attraction, the Warriors Tournament dance contest, got under way with the Grand Entry, which officially began the competition by the entrance of the hundreds of dancers from all over the United States onto the ceremonial dance area.

Also featured in this year’s Pow Wow was an opportunity for visitors to learn about the tribe’s history in a new way at the highly interactive and newly opened Kerretv Cuko (Building of Learning) Poarch Band of Creek Indians Museum.

Gehman said this year’s festival was, once again, a great experience that seemed to really bring together the community as well as a host of visitors.