Duo competes at Punt, Pass and Kick in NO 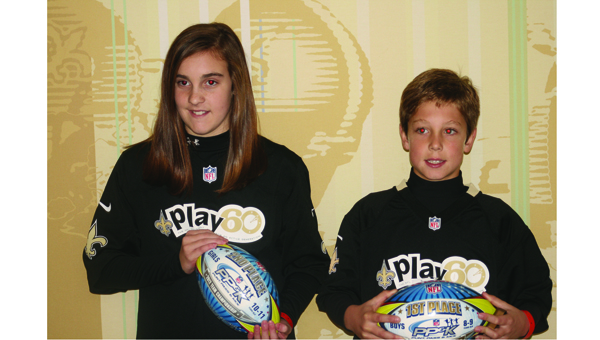 Two young athletes from Brewton recently had the opportunity to compete at the Punt, Pass, and Kick competition in New Orleans Sunday—and one finished in first place.
Nolan Atkinson and Mallori Floyd competed at the New Orleans Super Dome after winning their local competition in Brewton and advanced to New Orleans after placing at the regional competition in Pensacola.
This was the second straight trip for Atkinson to New Orleans as he and Steely Ruzic advanced last year.
Atkinson finished in first place in the 8-9 boys age group with a total score of 212-9. Atkinson had a punt of 68-feet while he passed for 66-11. Atkinson’s kick totaled 11-10.
Floyd finished second in her 10-11 age group with a total score of 142-3. Floyd totaled 62-3 for her punt, 55-5 for her pass and 24-1 for her kick.
“It feels pretty good,” Atkinson said of winning first place Sunday. “Being on the field before the game when the players ran out of the tunnel was awesome. It was great to be able to be there. Not many people get to do that.”
Atkinson said he was not too nervous this year after being at the event last year.
“I knew what I had to do,” he said. “I was excited to be there again. I only got nervous when we had to go out on the field to throw our pass in front of all the fans during halftime.”
While nerves did kick in a little during his passing portion, Atkinson said he enjoyed being on the same field with NFL players.
“It was pretty awesome to be at the Super Dome where the Saints play,” he said. “I got to slap hands with a lot of the players like Drew Brees, Mark Ingram who played at Alabama and David Thomas. I also got to talk to Jim Harbaugh, the 49ers head coach (the team the Saints were playing) for a long time after the competition. It is neat for me because my daddy use to compete for PPK when he was little. He works with me and my brother Hayden at home a lot. What I learn now will help me when I get to high school and can play for (T.R. Miller) coach (Jamie) Riggs.”
Floyd also said it was very exciting to be at the Super Dome where the Saints play.
“I wasn’t nervous, I just had a lot of fun,” she said. “I had the opportunity to run through the tunnel in front of the Saints players before the game. Not only did I have fun, but I made some new friends from Louisiana.”
Floyd offered thanks to local PPK organizer Gerald McAnally for bringing the event to Brewton and allowing her the chance to have this opportunity.
“If it wouldn’t have been for coach McAnally having the competition here in Brewton, I wouldn’t have had this chance,” Floyd said. “Thanks coach Mac.”
As the winner in his age group, Atkinson would have to finish in the top four of his age group nationwide to advance to the next round. As of Tuesday, Atkinson was in fourth place with other PPK events still waiting to be held.
Atkinson is the son of Rob and Lisa Atkinson while Floyd is the daughter Robbie and Stephanie Floyd.