The shooting death of a man killed while driving his car could become a capital case, prosecutors said Friday.
Michael Lane Cross, 20, of Brewton, was ordered held on $300,000 bond Friday in his first appearance before a judge. Cross is charged with one count of murder and one count of shooting into an occupied vehicle in the death of Marlon J. Spears of Brewton. 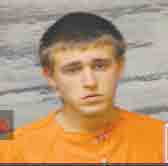 Spears was found slumped in his vehicle after a one-vehicle wreck at the intersection of U.S. 31 North and Mason Mill Pond Road late Monday night. Investigators initially thought Spears had died in the wreck but quickly discovered evidence he had been shot.
According to reports, Cross turned himself in to authorities Wednesday and said he believed he might have accidentally shot Spears while he was deer hunting at night.
Night hunting is illegal.
The Alabama Bureau of Investigation is handling the case because of a conflict of interest with the Escambia County Sheriff’s Department.
At Cross’ bond hearing Friday, District Attorney Steve Billy recommended $150,000 bond on each charge.
“We expect this to be a capital case from the grand jury,” Billy said. “He shot an innocent person.”
District Judge Dave Jordan noted the amount of bond recommended by Billy was outside the bond range on the charges, but he agreed the amount was warranted.
“Given what Mr. Billy has said today, I am going to act on his recommendation,” Jordan said.
Jordan asked Billy if he would recommend any restrictions on the release of Cross.
“He should not be allowed to possess any firearms or other deadly weapons,” Billy said. “Stay away from the victims family and if he did make bond, house arrest would be in order.”
Jordan agreed to the conditions of release in the bond setting adding the suspect could only leave his home in search of employment, to work, to attend church or to seek medical attention.
Jordan said Cross has a right to request a preliminary hearing on the charges within 30 days.