Doctors: Flu nothing to sneeze at 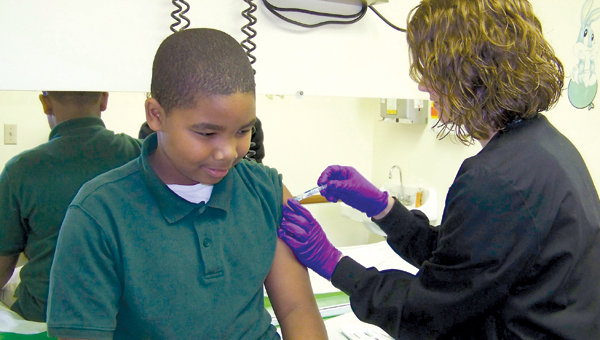 Pediatrician Dr. Marsha Raulerson has already vaccinated 900 children against the flu this season — a step she said is not a moment too soon.

Health officials in Alabama — and across the country — have said that the influenza virus has gotten an early start this season with several confirmed cases already seen in the Brewton area.

“We have seen a very early onset of the flu this year,” Dr. Marsha Raulerson, Brewton pediatrician, said Tuesday. “We are seeing a good bit of the Influenza A virus already this year.”

Raulerson, who serves as one of the county’s few pediatricians, sees patients from across the county and has seen growing numbers of those affected by the illness.

“I had a family of four children in the office last week,” Raulerson said. “Three of the children had gotten their vaccine and one had not. When I walked into the room, the three who had received the vaccination were laughing and playing. The little girl who hadn’t gotten her vaccine yet was lying on the table moaning. She had gone to school feeling fine that morning, but by 10 a.m. she couldn’t hold her head up.”

Raulerson said the symptoms and signs of flu come on quickly and are nearly impossible to miss.

“If a person has a sudden onset of symptoms like headache, all over body aches, coughing and fever, there’s a good chance it’s the flu,” Raulerson said. “Some people can even have vomiting and diarrhea with the flu. The fever can be very high with the flu as well.”

Raulerson said with most flu symptoms subsiding after about four days, treatment is simple and easy to tolerate — without medicinal intervention.

“I don’t usually prescribe Tamiflu for my patients,” Raulerson said. “The best treatment for healthy adults and children is to drink plenty of fluids, use acetaminophen or ibuprofen and have some chicken noodle soup. I know that may sound odd, but research has proven that there is something in chicken soup that helps with the flu virus and symptoms.”

Raulerson did say Tamiflu may be beneficial for the elderly or for those who have compromised immune systems. The time to take Tamiflu is after you’ve been exposed to the virus but are not yet sick.

“For younger children, the cough can be a big concern for parents,” Raulerson said. “Honey is a natural cough medicine,” Raulerson said. “It can soothe a cough and can be used as often as needed since it’s not a medication. The only thing to remember is that honey should never be given to children under 12 months of age.”

Raulerson said the flu vaccine is relatively safe with few problems arising from receiving the shot.

“There may be some soreness in the arm muscle where the shot is given, but there shouldn’t be any other problems,” Raulerson said. “It’s important to get the vaccine, whether through a shot or a nasal vaccine; either can be very effective. The vaccines that are being given now cover the strain of the virus we’re seeing. I’ve seen about 20 cases of the flu so far this season. It’s important to get the vaccine.”

Raulerson said the vaccines given are safe for just about everyone to take from 6 months to the elderly.

Raulerson said the reason to be vaccinated against the flu virus is more than just insuring you won’t get sick.

“Flu causes more death than any other vaccine-preventable illness,” Raulerson said. “Those who have underlying illnesses or the very elderly can see more complications from the illness than others, but there is that risk for everyone who gets the flu.”

Raulerson encouraged all residents to be vaccinated against the virus through any means necessary.

“It’s better to go to your regular physician for the vaccination,” Raulerson said. “The health departments can also take care of vaccinations and some pharmacies are also offering the vaccines. Getting vaccinated against the flu virus is smart and it also protects those around you.”

The Alabama Department of Public Health is promoting this week as National Influenza Vaccination Week. ADPH officials say vaccination is the best prevention of the illness.

“The goal of the immunization is to stop the spread of diseases that are vaccine preventable by providing vaccine to the citizens of Alabama, educating the medical personnel and the public on the importance of vaccinations, and ensuring that children who are in day care, Head Start, and school are adequately immunized against diseases that are harmful and sometimes deadly,” an ADPH press release stated. “Vaccines help your body recognize and fight germs and protect you each time you come in contact with someone who is sick with any of these diseases.”

Raulerson said those who are infected with the virus should stay at home and minimize contact with others until the virus has passed.

“Getting plenty of rest is one of the best remedies for the flu,” Raulerson said. “By staying at home and not going to work or school, it lessens the chance of spreading the flu to others.”

For information about vaccines offered at the Escambia County Health Department, call 867-5765.