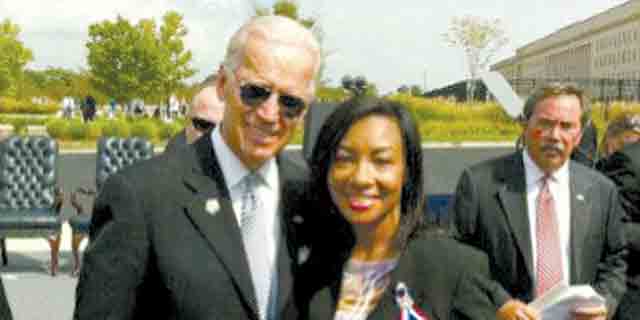 Woolen, right, is shown with Vice President Joe Biden in a 9/11 cememorative service.

A Brewton native making her way in the world of television and film is ready to bring that experience back to her home to help others live their dreams, too.
Bea Woolen, who’s stage name is Bea Bliss, has already entered some experience in television and film work to her resume that has been growing since she began her journey toward her dream when she was barely ready for school.
“I knew my passion for acting at the age of 5,” Woolen said. “After high school, I went on to earn a business degree. In 2007 I returned to the set as a background performer on major production sets to refamiliarize myself with the scene and craft. My dedicated work ethic was quickly noticed and opened many doors of opportunity and led to more prominent roles.”
During her teen years, Woolen said she took every opportunity possible to hone her acting skills.
“When I was in school, I was part of the dramas and plays we had,” Woolen said. “I was always interested in acting, but I just didn’t have the resources to pursue that interest.”
Woolen, who is a 1996 graduate of W.S. Neal High School, left Brewton to pursue her dream – one that she says will culminate in earning an Oscar.
“That’s my dream – to win an Oscar,” Woolen said. “I’ve already been through a lot and I have to find my way to reach that goal.”
Woolen left south Alabama for South Carolina where she was able to get inside the industry with those already working in film.
“I played an extra in ‘Reinventing the Wheel’ with James Brolin,” Woolen said. “I was able to get my feet wet then and become familiar with the industry.”
Her place in the industry isn’t limited to acting – a career that has already given her a spot on the IDMb Website with credited filmwork – she also writes and sings.
“It’s with my writing that I am able to come back to Brewton and help other people who want to get into acting,” Woolen said. “I know when I was young, I didn’t have much opportunity to act. That’s why I want to come and help produce some shows to give young people here the chance to see what acting is like.”
Woolen has joined the board of the Lost Arts Theatre group led by Felecia Sanja,  – a troupe already casting and producing community theatre shows for young actors in the Brewton area.
“I’ve written three scripts already,” Woolen said. “We will be working on that for February of next year and we’ll have spots for adults and children. T’s been a pleasure to work with (Felecia Sanja) and the children..There is definitely talent in Brewton and surrounding areas.”
Although stage acting is the best opportunity for young actors in the community, Woolen said she has dreams to take that opportunity further.
“I want to see about producing a feature film and maybe a couple of short films here,” Woolen said. “I’m still working on some of the details. There are a lot of contracts involved and I have been able to find some people who are willing to assist me with this project. “
Woolen’s dream is one she is happy to see becoming a reality and one she hopes she can help nurture in young aspiring actors in her hometown community.
“It’s not easy to get into acting in films,” Woolen said. “If I can help someone else who is talented and ready to work, that’s part of what I want to do.”
Woolen said the collarboration with Lost Arts Community Theatre group will require a casting call as early as January 2013.

Rivalry moves on to regionals