End of an era: Jennings on road to retirement 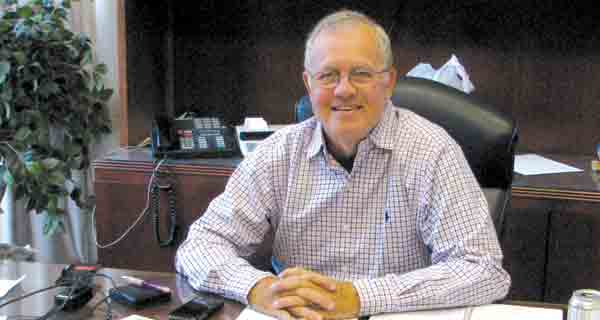 On Monday morning, Ted Jennings will end his reign as the mayor of Brewton and begin a life of leisure and service beyond the office.
“Everything I’ve done in this office has been for the benefit of the people of Brewton,” Jennings said. “Everything is important. All the pieces of the puzzle interlock together and make this city what it is.”
And, what the city is today is something Jennings has had a hand in since taking over the term of Brooks Hines on the city council bench.
Following the completion of that term, Jennings threw his hat into the ring in his attempt to become mayor. Winning that election over challengers, it’s a seat he held for 24 years. During that time, Jennings said one of the most important accomplishments is intangible.
“There have been a lot of people involved in city government while I’ve been here,” Jennings said. “Together we have made many decisions on where we wanted to take this city. I think a lot of those plans have come through and we are in a very good place now.”
Through his years in office, one of the areas of pride for Jennings is being the head of an open, honest government.
“We are one of the most transparent governments in Alabama,” Jennings said. “We have done nothing that we haven’t been as open and transparent as possible. We never had secret meetings. Everything was announced and always out in the open.”
Those open meetings have resulted in decisions that Jennings said he knows hasn’t been popular with everyone involved in the work of the city.
“Those times are just things we had to deal with,” Jennings said. “There are always things you have to do that you’d rather not have to do, but we always did what we thought was best for the entire city. That’s something that was always serious for me. You have to deal with things that touch people’s lives. I was always concerned about things that you do that would negatively impact the lives of people. If that happened, it was never anything intentional. One main job if the mayor is being a problem solver. You have to look at the problems in the community and find the best solution to the problem.”
Through those years at the helm of Brewton’s government, Jennings said he learned one important trait that he tried to practice every day.
“One characteristic of a good politician is to have a short memory,” Jennings said. “Everyone doesn’t always agree with everyone else. That’s just life. You have to forget the things that upset you and move on to do the job you have to do.”
As his last days in office become fewer and fewer, Jennings said the duty placed on him with the title of mayor is something he leaves behind with pride.
“It has been a humbling experience to be mayor,” Jennings said. “I took a lot of pride in serving the citizens of this community. I like to think I was always willing to listen and understand where people stood.”
In the days ahead, Jennings said he hopes to slow down enough to enjoy life and be available for whatever may come his way. Although he does have some plans, many of those will be taken on an as-it-comes basis.
“I’ve promised myself I would make any definite plans until after the first of the year,” Jennings said. “I don’t plan on riding off into the sunset, but I don’t want to overload myself with obligations right away. I do have some plans. I have done some pharmacy relief work at McMillan and will do that when they need me. I also have some plans to do some consultant work in relation to city and county government.”
That plan to stay involved in government activities may be an easier job for Jennings after recalling some relationships he has formed in his tenure as mayor.
“I’ve made a lot of friends in government over the years,” Jennings said. “Jo Bonner is a good friend of mine. I met him when he was chief of staff for Sonny Callahan. Jeff Sessions and I are pretty good friends.”
Jennings said he also plans to continue his service to the community through organizations he has been affiliated with over the years.
“I’m a past president of the Rotary Club and will continue to be an active part of the group,” Jennings said. “I’m just thankful these groups still want me around.”
Even beyond the world of politics, Jennings said he has gained respect and admiration for a number of people — mainly the employees of the city.
“Until you’ve been in a similar position, the people of this city cannot begin to realize the dedication of our employees,” Jennings said. “They go beyond the scope of what we should expect them to do. I’d put them up against any group of employees, public or private.”
As Jennings plans his departure from the mayor’s office, he hopes to leave a good impression behind him as the man who put the needs of the city first.
“I hope that people will remember me as a person that showed up to work every day,” Jennings said. “When it came to working for the city of Brewton and the people of our community, I always did the best that I could.”