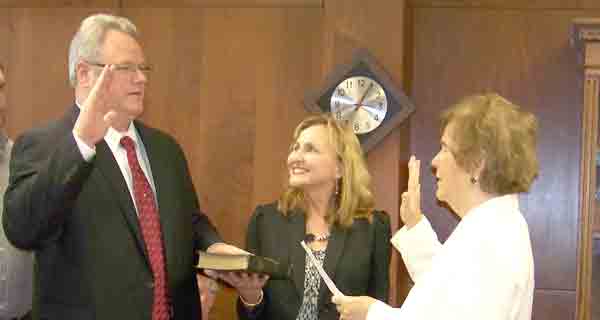 Doug Agerton, left, is flanked by his wife Stephanie, as his mother Rachel Agerton administers the oath of office as he takes his place as the county's probate judge.

The Escambia County Commission chambers were filled to capacity Monday afternoon, but not to witness action by the commissioners.

With dozens of family members and friends attending, Doug Agerton took the oath of office as he bring a six year term as the county’s probate judge.

Administering the oath was Rachel Agerton, who just happens to be the new judge’s mother and a former probate judge herself.

“I’m so excited for Doug,” Rachel said just before administering the oath of office to her son. He’s ready to go to work.”

Doug Agerton began he portion of the ceremony by asking his church pastor to offer a blessing over the event and his service to the county citizens.

“I feel privileged and honored to be the probate judge for Escambia County,” Agerton said. “Im’ ready to get to work and get started on these next six years in the probate office.”

For more photos and information concerning Agerton’s swearing in ceremony, see the Wednesday edition of The Brewton Standard.

Something to Braggs about: JDCC basketball gets first win…