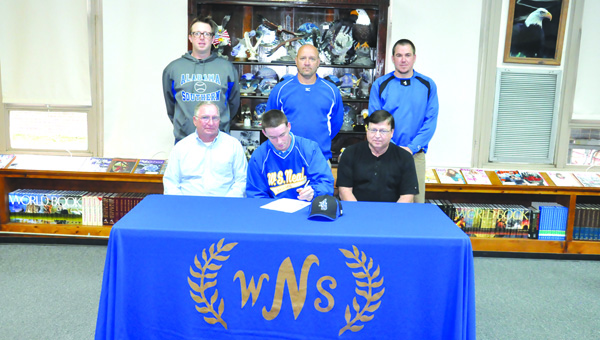 W.S. Neal senior baseball player Brian Settle will be flying from one Eagle nest in East Brewton to another nest in Monroeville next year as he signed a baseball scholarship Tuesday morning to play with the Alabama Southern Community College Eagle baseball team.
As a junior last season for the Eagles of East Brewton, Settle led W.S. Neal to a 23-12 record and advanced to the second round of the class 4A state playoffs.
Settle went 7-4 and was chosen as an honorable mention member of the Alabama Sportswriters Association all-state baseball team. Settle pitched in 61 innings and had a .91 earned run average. Settle struck out 82 batters and walked 29. He pitched three shut outs and had seven complete games.
“It feels great to sign a college scholarship,” Settle said Tuesday after inking his named on the line for ASCC. “I wanted to commit to Alabama Southern because they have a really good team up there and I know that they will take care of me and take care of my arm. I have always thought about going there. It was important to sign before my senior year so it would not run into my season. Not knowing if anybody was looking at me or anything during the year, so it just feels better to know that someone is already there. I would like to first of all, have a good run and make it state this year. That would probably better me and help make me a starter at Alabama Southern.”
Alabama Southern head coach Daniel Head said he looks for Settle to be an immediate impact in Monroeville.
“We have been seeing him play since his sophomore year and we have been really impressed with his ability and everything he has been able to accomplish,” Head said. “He has improved every year and has gotten better. He came out and worked out with us this fall and he looks like a guy that can come in immediately and help us out on the mound. Left-handed pitching is something you are always looking for and he has a lot of experience on the high school level and he has been successful. We expect him to come in and make an immediate impact on our program.”
W.S. Neal head coach Campbell was on hand for the signing and said he looks for good things from Settle this season.
“Brian has been a fixture on the mound for us the last three years,” Campbell said. “We are looking for him to feel that spot this year and be the No. 1 pitcher for us again this year.
“He is a big reason for the success we have had in the past and we hope to continue to have it this year.”
Settle, Campbell and the rest of the W.S. Neal baseball team will begin their 2013 season Monday, Feb. 18 with a 6 p.m. game against Excel in the Eagle Classic at W.S. Neal.