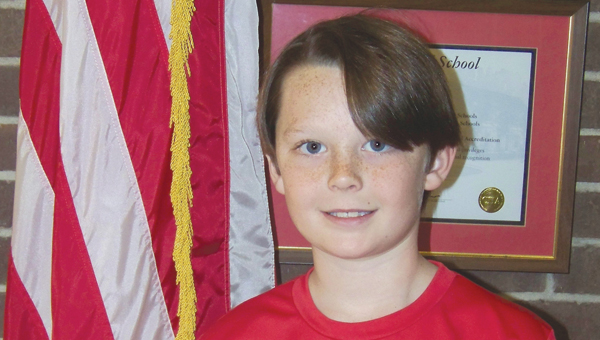 For more than two months, Blake Jernigan’s time was filled with anticipation and planning for his first trip to Washington, D.C. The trip was more than just a vacation for Jernigan. The Brewton Elementary School fourth-grade student had the opportunity to witness the presidential inauguration.

Jernigan said the trip to the nation’s capital was his first and was much more than a chance to see President Barack Obama take the oath of office — he also toured the city and learned more about the workings of government. Jernigan’s performance in school helped lead to his participation. “My teacher got me connected with the People to People Ambassadors organization,” Jernigan said. “They took a look at my grades to see if I could go. I don’t make less than 95 on anything. I guess that was enough.” Jernigan said he got the word in late November and began making plans with his mother, Emmie, immediately for the trip. “We had to think about it a little bit, but I really wanted to go,” Jernigan said. “My mom and I flew to Washington on Wednesday morning. And she was with me on Thursday for my birthday. We had a really nice dinner together.” The highlight of the trip was seeing the inauguration. “It really was interesting,” Jernigan said. “We got up at 4 a.m. on Monday and had to get breakfast really quickly. We had to be ready to go so we could get a good place.” The “good place” ended up being farther away than the group had hoped, Jernigan said. “We were about half way up from where the president was,” Jernigan said. “We really couldn’t see him well. He was just a little dot. But, we watched every thing on the Jumbotron. It was special to be there to witness the first African American president take the oath of office for his second term.” Jernigan said security was tight and it took quite a bit of time as the group entered the area for the inauguration event. “We got in line about 4:30 that morning and had to wait until the gates opened at 6:30 a.m. to go in,” Jernigan said. “We had to take off our jackets and our lanyards and everything to get checked. It was a little bit of a pain, but they checked everyone to make sure nothing bad happened.” The evening was filled with festivities for the students, including an appearance by “Obama.” “It wasn’t really him,” Jernigan said. “They got someone who looked like him and had make up on them and he gave a really interesting speech at the ball. It was a lot of fun.” After making the memory of a birthday celebration and witnessing an historical event in Washington, Jernigan said the days that followed were filled with tours and lessons he wouldn’t have seen in a book. “It was really interesting every day we were there was busy,” Jernigan said. “We spent a lot of time touring Washington, D.C. and visiting the monuments. We saw the JFK Memorial, and saw the Thomas Jefferson Memorial on Saturday. We saw the Martin Luther King and Eleanor Roosevelt statues on Sunday. We also visited the Vietnam and Korean War memorials Sunday, too. We saw a lot of the memorials and it was interesting to see them all.” Jernigan said the day after the inauguration was filled with visits to area museums and even a trip to the ballet. “We had to do a lot of walking on Tuesday since the streets were still blocked off,” Jernigan said. “That night we went to a performance of the Washington National Ballet. We didn’t get back to our hotel until midnight.” Jernigan said he hoped to have an opportunity to take similar trips with the People to People Ambassador program in the future. “They told us that we could apply to be considered for trips in the future,” Jernigan said. “If my grades are good enough, I could go to Japan someday.”